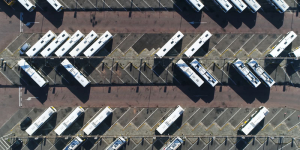 The companies haven’t said how many charging stations the order contains, nor did they disclose the contract’s value. Hitachi simply states that it will supply the charging stations for the next two BVG bus depots.

As reported in summer 2020, the Grid-eMotion Fleet consists of standard containers which contain all grid connection and charging systems. Depending on the configuration, the charging capacity ranges from 50 to 600 kW, and various pantograph chargers are possible in addition to wired CCS charging. It is not clear from the Hitachi announcement which solution BVG has chosen.

“We are pleased to support the city of Berlin in its transition to quiet, zero-emission transportation and a sustainable energy future for the people of this legendary capital city,” said Niklas Persson, managing director of Hitachi Energy’s Grid Integration business.

So far, BVG has relied on charging stations from Polish supplier Ekoenergetyka, among others, which received an order for 130 CCS chargers in February 2020. In addition, the Chinese supplier XCharge has set up 30 DC chargers for e-buses in Berlin.

BVG plans to convert its city bus fleet of around 1,500 vehicles completely to electric drives by 2030. To this end, the public transport operator has already ordered several batches of electric buses. Most recently, an order for 90 twelve-meter buses was placed with Dutch manufacturer Ebusco in December. The Ebusco 2.2 are to be charged exclusively at the depot.