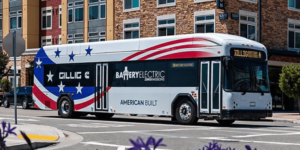 President Biden and the Federal Transit Administration (FTA) today awarded $409.3 million in grants to 70 projects in 39 states to modernise and electrify America’s buses. The money is, however, only the first instalment of funding that will run in the billions.

In fact, the FTA says it received more than $2.5 billion in funding requests once the US Government issued the Bipartisan Infrastructure Law last November, worth a trillion US dollars. Still, the requests amount to more than five times the funding available under the previous law since the FTA received 303 eligible project proposals.

However, the agency in today’s statement said it will be able to support more projects in the next round of grant awards. This is from an additional $5.1 billion authorised under the Grants for Buses and Bus Facilities Program that is part of the Biden bill – meaning more projects can be funded over the next five years. The government announced the new funds just a week ago. This year alone, $1.1 billion will go to the Low or No Emission (Low-No) program.

However, for this fiscal year, the FTA has granted 409.3 million dollars to 70 projects in 39 states. Examples of selected projects range from funding the purchase of electric buses and infrastructure and fuel cell hydrogen vehicles. Some funding was also granted to structural modernisations that did not involve low or zero-emission vehicles.

In electrification, some funding amounts were substantial, ranging from over eleven million dollars over projects in the nearly nine million dollar range with others receiving anything between one to multiple millions.

Examples in the highest funding range include the Connecticut Department of Transportation, which will receive $11.4 million to buy battery-electric buses.

The full list of projects can be found here.