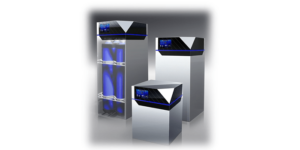 Toyota has developed a new hydrogen storage system for different applications and tasks. Due to different safety standards and environments, the 700-bar high-pressure tanks developed for the Toyota Mirai could not be easily used in other areas until now.

According to the Toyota announcement, the new storage system comprises several high-pressure tanks made of multilayer high-tech plastic that store hydrogen at a pressure of 700 bar. The pressure thus corresponds to the automotive system, but the planned areas of application do not. Toyota mentions rail transport, shipping, port handling or mobile generators.

Although the hydrogen storage system is still a prototype, Toyota has already provided some details on its design. All units, regardless of size, have the safety features familiar from the Mirai. These include a detector and a safety valve that detect or prevent the escape of hydrogen. According to Toyota, these measures ensure safe and efficient storage and transportation of hydrogen, allowing refuelling of fuel cell vehicles and generators even in hard-to-reach places such as ports and mountainous regions.

Three of the storage configurations use tank modules based on the hydrogen tanks used in the Mirai. However, “larger tank modules with expanded capacity” are also being developed. The size of these tanks is not specified in the announcement.

A first test for the prototype is scheduled in the coming days: A fuel cell truck with a large-volume 450-bar high-pressure fueling system (2×16 tank packages) will deliver hydrogen as part of the ‘Super Taikyu Series’ motorsports event in Suzuka. However, the hydrogen stored in the new tanks will not be used for a fuel cell: Toyota is racing a Corolla with a hydrogen combustion engine in the touring car racing series.