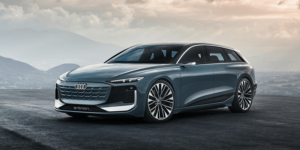 Audi has presented the electric estate concept A6 Avant e-tron. The near-production concept is intended to provide a preview of the production model planned for 2024 – one year after the sedan.

Audi does not yet mention the boot volume, which is important for an estate car, or the dimensions of the load compartment in the press release. The length of 4.96 metres and the wheelbase of 2.95 metres correspond to the saloon. The rear window of the Avant is not completely vertical, but also not as flat as in other combustion engine station wagons of this size – which suggests a decent load volume. However, the loading edge – also due to the two indicated diffusers at the rear – appears very high and the height of the boot opening rather low.

The drive of the station wagon study also corresponds to the option that Audi presented last year in its PPE sedan: The electric all-wheel drive produces 350 kW. Audi has only become more specific about the battery: in 2021 it was still said that the large battery would have “around 100 kWh”. In the meantime, there is only talk of 100 kWh. This should provide a range of around 700 kilometres in both the saloon and the estate – the estate has a slightly higher drag coefficient of 0.24 than the saloon (0.22), so in practice, it should have a slightly shorter range.

The battery can be charged with up to 270 kW. This means that electricity for up to 300 kilometres can be charged in ten minutes. Charging from 5 to 80 percent is said to take less than 25 minutes. With the combination of charging power and range, the A6 family is to be “uncompromisingly suitable for long journeys”, according to Audi.

This is also to be helped by the spaciousness of the interior, which promises ample legroom even in the back seat thanks to the flat interior floor of the electric platform and the long wheelbase.

Audi is not yet giving any details regarding the electric drive system for the 350 kW model. It is only generally stated that the “sporty top models” can accelerate to 100 km/h in well under four seconds – so an electric S or RS model could still follow. The “economically designed entry-level variants” with rear-wheel drive should complete the standard sprint in less than seven seconds.

In addition to the concrete plans for the electric A6 models, Audi is also giving another preview of the PPE planning: “The Audi A6 e-tron Sportback and Avant concept cars are now the first members of a family of vehicles – initially in the C-segment and later also in the B- and D-segments,” Audi writes. In other words, the PPE is not only to be used in the upcoming Q6 e-tron and the two related A6 models, but is also coming to smaller models – including high-volume segments that the VW Group previously wanted to cover primarily with the MEB.

With the A6 e-tron Avant concept, Audi is the first of the German premium manufacturers to confirm an electric estate in the company car class. At BMW there are still rumours about an i5 Touring, but this model has not yet been confirmed. Mercedes was quicker with the sedan, but the EQE can already be ordered in the first variants. However, there are probably no plans for an e-wagon in Stuttgart – on the contrary. Media reports that Mercedes intends to phase out the estate versions with the upcoming model changes have not been denied by the former estate pioneer.