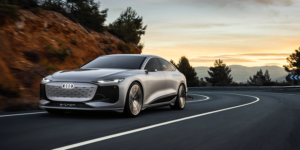 Audi has just presented the A6 e-tron concept at Auto China in Shanghai. Although it adopts the familiar model designation of the combustion engine, the A6 e-tron is based on the PPE, i.e. an all-electric platform. It seems the electric car’s chances of going into series production are good since Audi already mentions a concrete year.

Audi says the series version is to be presented at the end of 2022, and the market launch is planned for 2023. The name E6, which has in the meantime become the subject of speculation in the media, was only the internal working title. Now the German carmaker has officially said the electric car is to be launched on the market as the A6 e-tron.

Although the vehicle still bears the epithet “concept”, Philipp Römers, Head of Audi Exterior Design that 95 per cent of it is already the later series design. But that really only applies to the exterior for which Römers is responsible: the show car from Shanghai is an exterior model on wheels. It is not possible to look inside; the A6 e-tron concept does not even have door handles. The interior design will be presented in the run-up to the 2022 premiere.

So for the time being, all that remains is a look at the body of the show car: the 4.96-metre-long saloon is characterised by a very long glasshouse (wheelbase: 2.95 metres), making the electric A6 more of a Sportback than a classic saloon compared to the combustion engine as the MLB base. The front bonnet is still very long, the front is emblazoned with a closed grille in the “inverted face” design, which can already be seen on other electric Audis. What is new, are the extremely narrow LED headlights. There is a simple reason for this: the visible light strips are effectively only the daytime running lights and turn signals. Just like the Audi Q8, the LED main headlights are hidden in the black panel below the daytime running lights and only become visible when they are switched on. As with the recently presented Q4 e-tron, individual daytime running lights are also to be possible on the A6 e-tron.

Another new feature in the study is that the indicators are also projected onto the ground in front of the vehicle. It is not yet clear whether this feature will make it into series production. According to Audi, this also depends on the respective approval conditions in the individual markets.

For the body, the focus was not only on design but also on aerodynamics. Audi gives a drag coefficient of 0.22, which is higher than the Mercedes EQS’s series value of 0.20. In contrast to the Mercedes, Audi has used a different approach with camera exterior mirrors. Of course, it remains to be seen in detail what the production model and possible later basic versions will look like in 2023.

The A6 e-tron concept is more than just a design study, and it is also worth taking a look at the technical data. So far, only a few figures are known about the PPE on which the vehicle is based. Although Audi will build the Q6 e-tron based on the PPE as early as 2022, before the A6 follows a year later, there is little information about the e-SUV so far.

As PPE developer Johannes Arneth explained at the premiere, the large battery will have “around 100 kWh”, and there will also be a smaller battery. Audi did not want to confirm whether the batteries will be based on the standard battery cell announced by Volkswagen at the Power Day. The range is to be more than 700 kilometres in the top model, the 800-volt system is to enable a charging power of up to 270 kW. According to Audi, this would allow 300 kilometres of electricity to be recharged in ten minutes. Charging from 5 to 80 per cent should take less than 25 minutes.

The battery here is the same as that of the Q6. In close collaboration with the design team, they have managed to create entirely different vehicles based on the same battery, says Arneth. “The flat floor allows us to implement different body shapes that are in demand with our customers – such as electric sportbacks.”

In contrast to the combustion engine A6, rear-wheel drive is standard, but there will also be all-wheel-drive models, then called A6 e-tron quattro. The engine on the rear axle is a PSM, while an ASM is fitted to the front axle in the quattro models. The concept car is an all-wheel-drive vehicle with a system output of 350 kW and a torque of 800 Nm.

The concept car does not yet have door handles, but it does have loading hatches. While Audi had still emphasised in 2018 at the presentation of the e-tron quattro that it saw the charging ports between the front wheels and the doors as the ideal position (and had spent a lot of money to implement this on the basis of the MLB evo), the assessment from the German carmakers seems to have changed in the meantime: In the A6 e-tron concept, the charging ports sit above the rear wheels.