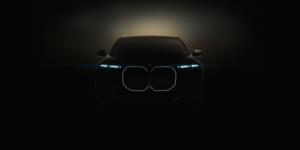 BMW will present its electric flagship i7 at Auto China in Beijing on 20 April – and with it the new 7 Series. In advance, the manufacturer has shown the first teaser images of the uncloaked i7 and revealed some details.

BMW does not yet specify the battery size. However, the iX e-SUV, like its i7 competitor Mercedes EQS, has a usable energy content of over 100 kWh. The i7 is also likely to be in this region, but its range will not come close to the EQS’s 770 WLTP kilometres.

The teaser images suggest one reason: while Mercedes has focused very strongly on aerodynamics and achieved a cW value of 0.20, BMW seems to have taken a different approach – and not only because of the mixed platform with the combustion engine versions of the 7 Series. The front is dominated by a very large and upright double kidney. Here, design apparently took precedence over aerodynamics.

BMW states that “upper light elements made of exclusive crystal glass and the illuminated contour of the kidney grille” are important design elements at the front. This results in a “modern and present appearance”.

In the interior, in addition to the BMW Curved Display, a new type of light and function strip in the area of the instrument panel and doors provides a visual and haptic perception. The i7 will also feature the newly developed Sky Lounge panoramic glass roof with LED light threads and the BMW Theatre Screen, which extends from the headliner in the rear, a 31-inch 8K display in 32:9 format for using streaming services while driving.

In recent months, BMW had repeatedly given glimpses of the final testing phase of the i7 – the camouflaged prototypes were on the road around the globe for winter and hot-land testing, for example, and most recently in February BMW presented the acoustic testing on new acoustic test benches specially designed for electric mobility.

As part of the presentation of the business figures for 2021, the BMW Group had raised its electric plans “confirmed by the success of its all-electric models to date”. By the end of 2025, the Munich-based company wants to sell a total of more than two million all-electric cars, and the 50 per cent share of electric vehicles previously targeted for 2030 can now be achieved sooner.