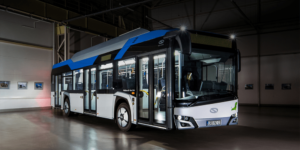 More Solaris buses are to hit polish streets. Public transport operator Miejski Zakład Komunikacji has ordered eight Urbino 12 Electric for use in the Polish city of Zielona Góra. The electric buses will be adapted to the city’s existing charging systems and are scheduled for delivery within a year.

The order will expand the city’s electric fleet. Beyond the delivery, the order also includes the option of ordering up to six more electric buses of the same type. The vehicles have 30 seats.

“Today, we start our collaboration with Zielona Góra, yet another city on the electric map of zero-emission Solaris buses,” pronounced Petros Spinaris, Solaris Bus & Coach board member responsible for sales, marketing and customer service. “The pioneering activities related to the electrification of the urban fleet in Zielona Góra represent an excellent example for many European cities.”

The propulsion system of the Solaris Urbino 12 electric for Zielona Góra reportedly consists of two electric motors integrated into the drive axle. In addition, the voltage converters for the traction motors are equipped with SiC transistors. The buses’ batteries are charged via stations set up at the depot, and there is an inverted pantograph in the city. For this purpose, the vehicles are equipped with current collector rails in the rear area of the roof.

Solaris says that so far, it has so far delivered more than 500 zero-emission e-buses to 36 Polish cities. An Urbino 18 electric was trialled in Zielona Góra last year. Prior to that, the city had purchased and operated a number of shorter internal combustion buses from Solaris.

The Polish municipal association Górnośląsko-Zagłębiowska Metropolia (GZM) had most recently ordered 32 electric buses and the associated charging infrastructure from Solaris. The 12- and 18-metre-long Urbino electric buses will be used by operators from Gliwice, Katowice, Sosnowiec, Świerklaniec from 2023. In total, GZM has ordered 27 Urbino 12 electric solo buses and five Urbino 18 electric articulated buses.

Solaris received orders for electrically powered Urbino 12 electric school buses in February this year. A total of five municipalities ordered the vehicles after receiving funding from a government subsidy programme.