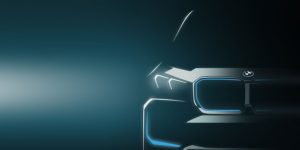 BMW has published initial data and a teaser image of its upcoming iX1 e-SUV. The model should have a standard range of over 400 kilometres.

The way in which BMW has published this information is unusual: Usually, such information is published in a planned manner via the press distribution list before the market launch. In this case, however, BMW has put a subpage about the iX1 on its website where interested parties can register for further information.

On the website, a WLTP range of 413 to 438 kilometres is mentioned as “forecast values based on the current development status of the vehicle”. The WLTP consumption is 17.3 to 18.4 kWh/100km. Further data are not mentioned on the product page.

It is not possible to make exact conclusions about the battery size on the basis of the WLTP consumption and the range: the standard consumption includes the charging losses “from the socket”, but not the range – this is only determined in the vehicle and not from the socket. Assuming a charging loss of 15 per cent, this would result in a battery size of around 65 kWh.

Performance data of the drive or the charging power are not yet known, but the iX1 will use BMW’s fifth-generation electric drives – i.e., current-excited synchronous motors, as they have been used in all new e-models from BMW since the iX3. On the product page, BMW only talks about “dynamic performance values and high range”.

The iX1 is not based on a purely electric platform, but on a mixed platform: the model will only be available as a combustion engine at the market launch, “shortly after the market launch”, according to the BMW page, “a plug-in hybrid for locally emission-free driving and the fully electric BMW iX1” will follow. Data on the PHEV has not yet been revealed.

Despite its combustion engine base, the iX1 is said to be “spacious-compact” and to combine the ” innovation of BMW i with the flexibility of a BMW X model”. The front visible in the teaser image is indeed reminiscent of the manufacturer’s SUV models, which of course comes as little surprise. The lines in the double kidney, the lower air intake and also the LED daytime running light signature are clear and characterised by straight lines.

The iX1 is to be built at the BMW plant in Leipzig from 2023. The third generation of the sister model Mini Countryman will also roll off the production line there. Both models will probably share most of the technology, which is why the range data of the Mini should not deviate far from the values mentioned here.