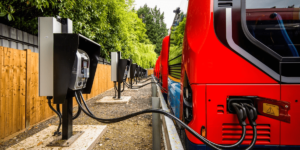 The US state of Washington has passed a bill banning the sale, purchase and registration of new petrol-powered vehicles of model year 2030 or later. If it becomes law, Washington will phase out internal combustion vehicles five years earlier than other states such as California.

The transportation package is called Move Ahead Washington and is sponsored by Sen. Marko Liias and Rep. Jake Fey, the respective chairs of the Senate and House transportation committees. The plan will see $16.9 billion in investments over 16 years in major projects throughout the state.

With 5.4 billion dollars earmarked to flow into CO2 reduction measures, including “multi-modal expansion”, another three billion dollars will go towards better public transport. “Active transportation’ will see investments of $1.3 billion, including Safe Routes to School and school-based bike programs and, for example, passengers up to the age of 18 are to be able to use public transport free of charge. Other transport sectors are also taken into account: waterways are being addressed with $836 million to build four new hybrid-electric ferries, the rail sector has not been forgotten with $150 million towards ultra-high-speed rail, and among other initiatives, $50 million is being invested in walking and biking infrastructure.

“We said when this package was announced that it was a first draft, and now we’ve passed a package that incorporates the feedback we’ve received over the last month,” Liias said. “We’re investing in projects from rural to urban areas across our state, letting kids ride free on our buses, ferries and trains, and so much more — and all without punting the cost to working families.”

The law is now with Governor Jay Inslee for his signature. This is not the first time Inslee has had a law to this effect on his desk: Back in April 2021, a very similar package of laws was submitted, which also provided for the phasing out of internal combustion vehicles by 2030. At the time, the governor had concerns about some of the wording, for example, on a road user fee. This would have meant that the bill ran the risk of being rejected on this measure alone. This legislation now on the Governor’s desk awaiting a signature is part of a bigger bill and does not include the same road usage charge requirement. Observers say it is unlikely that Inslee would veto the entire effort, meaning that – this time – it is likely to become law.

The US publication Electrek points out that the wording in the current bill is such that it would apply to every vehicle registered in Washington – and not only to vehicles that had their first registration in Washington. This would also make it illegal to import used internal combustion vehicles from other states.

Further details are to be worked out by the end of 2023, and a “multi-agency planning council” is to develop guidelines for converting an electric vehicle fleet. This legislation would put Washington into the lead at ending fossil-fuelled vehicle sales, with others trailing behind with 2035 targets in California, Massachusetts, and New York (not to mention every other state which has not yet set a target).