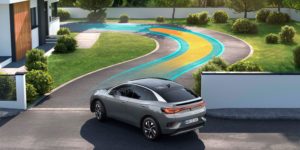 Volkswagen has detailed its software generation 3.0 for the MEB electric cars. The company considers the new features a “boost to innovation for the ID. family”. However, some of the changes are much more mundane, such as the display of the state-of-charge.

VW had announced the 3.0 software in December 2021 but focussed on improving charging performance in MEB models with the 77-kWh battery. They managed to add about 50 kilometres in real-world range and improved multi-stop route planning. Since the MEB software has been rolled out in the Skoda Enyaq and the ID. Buzz, other functions have become known, which VW summarises in a separate announcement.

The ‘Travel Assist with swarm data’ helps centre the vehicle inside the land while allowing lane changes, and it also adapts to the driving style. With two radars in the rear and ultrasound, the feature can keep an eye on the surrounding traffic and, on the highway from 90 km/h, actively support lane changes if desired. However, this requires the capacitive steering wheel to sense the driver’s hands. If the swarm data is available, the system can also provide support on roads with only one lane marking – this would not be possible with the sensors in the vehicle alone.

In addition, ‘Park Assist Plus’ has been expanded to include several functions, such as the “memory” function. This allows the vehicle to learn up to five parking manoeuvres – the driver has to park once himself and save the process. The car can then repeat the manoeuvre independently, for example, in driveways or to park in the garage. The driver only has to monitor the moves, which can be up to 50 meters long.

The new software also brings some changes to the displays. In addition to the remaining distance to destination, the cockpit also displays the state of charge (SOC) next to a correspondingly filled battery symbol in per cent. “We are in close contact with our customers via the ID. Drivers Club – for example, many of them wanted the percentage information, so we made it happen,” said Silke Bagschik, CMO of the ID. Digital project unit and Head of Sales and Marketing for the e-Mobility series. In addition, the remote area of the “augmented reality head-up display” is expanded to include new symbols, and the distance to the destination is also displayed in the HUD.

Incidentally, the bidirectional charging function is not yet part of the 3.0 software. That will only come with version 3.1, as VW’s head of development Thomas Ulbrich recently indicated.