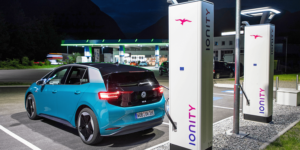 Soon, all electric models in VW’s ID. series will roll off the production line with a new software version that will bring advantages when charging. Most of the updates will be applied “over the air” to vehicles that have already been delivered.

With the 77 kWh battery, the maximum charging power increases from 125 to 135 kW (or 150 kW with the ID.5 GTX). This should save up to nine minutes when charging from 5 to 80 per cent. In addition, all ID. models with the 77 kWh battery will in future be capable of bidirectional charging (vehicle-to-home). However, this requires a special DC BiDi wall box. To conserve the battery, there is the new Battery Care Mode, which limits the charge level (SoC) upwards to 80 per cent. For vehicles already delivered, these functions will also be successively available via over-the-air updates.

Rumours about a higher DC charging power for the MEB models had been around for some time, at times there was talk of up to 170 kW. With the ID.5, the update to 135 kW was announced, which is supposed to offer above all a flatter charging curve, in addition to the slightly higher peak power. VW hopes that this will reduce the charging time to 80 per cent from 38 minutes to 29 minutes. At the order launch of the ID.5, it was then announced that the ID.5 GTX can even charge at up to 150 kW at peak. Updates for the MEB models of other group brands have not yet been announced, but will probably follow.

While VW only talks about the update starting production “shortly” in the announcement, “Auto, Motor und Sport” has learned that it will specifically be calendar week 51. According to the report, up to 170 kW is also not completely out of the question. “Under ideal conditions, you might even read 175 kW charging power at the pillar one day, the 135 kW is something many customers often experience!”, the trade magazine quotes Silke Bagschik, head of sales and marketing for the e-mobility series at VW. With a later update, more than the 135 and 150 kW could also be made possible as standard.

However, the 150 kW charging power of the GTX versions probably does not pay off in as great a time saving as expected: since the batteries – despite the same capacity – use cells from a different supplier, the peak can probably only be kept short. Instead of 29 minutes, the charging time for the GTX is only 36 minutes, according to AMS.

In addition, up to 50 kilometres more range should be possible with the ‘E 3.0’ software package, as Elli boss Elke Temme said in an interview, “even in winter temperatures”. However, this information is not included in the VW communication on the update.

Another content of the update concerns route planning: For long distances, multi-stop route planning is said to have been improved. In order to reach the destination as quickly as possible, the system incorporates traffic and route data as well as the desired charging status at the destination. With the live occupancy and performance of the charging stations, it can thus happen that the route planning suggests two short charging processes instead of a single charging process. Only tests will show how great the advantages of this function will be in everyday life – up to now, the VW software sometimes planned 50 kW chargers when HPC was available nearby.

In addition, VW announces that the ID. models will receive the Plug&Charge functionality “In the course of 2022”. Billing after automated authentication will run “as usual via the We Charge contract”, VW says. Plug&Charge will be used in the networks of Ionity, Aral, BP and E.ON. “Talks with other major partners are ongoing,” the company wrote.

VW does not explicitly mention here – in contrast to the update of the charging power and bidirectional charging – that existing vehicles will also receive the Plug&Charge function via update. Only when asked did a spokesperson confirm that Plug&Charge would be made available via an over-the-air update for ID. models already delivered.

This means that the MEB models were prepared for Plug&Charge right from the start; other manufacturers cannot update vehicles that have already been delivered: Plug&Charge uses so-called certificates so that the car, charging station and charging provider can authenticate each other reliably. For these certificates, a specially secured memory must be installed in the vehicle – we have elaborated more on how Plug&Charge works in this article.

“The across-the-board enhancement of the charging infrastructure is decisive for accelerating the ramp-up of the electric mobility campaign. Charging must become simpler and easier to integrate into daily activities,” says Bagschik. “With the new software in our ID. Models along with solutions like Plug & Charge, we as a manufacturer are making a decisive contribution to realising such goals.”

Elke Temme highlights the update for bidirectional charging. “Our goal is to ensure that an electric vehicle is capable of being a customer’s primary car – without any compromises,” says the former Innogy manager. “Such energy storage options are essential for increasing the share of renewable energies. In addition, this can also make charging significantly cheaper for customers, and they will then be able to feed their own power into the public grid.”