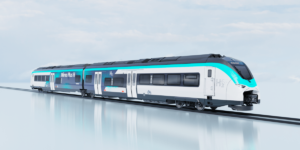 The first hydrogen train for the German state of Bavaria is taking shape: Siemens Mobility and Bayerische Regiobahn (BRB) recently signed the leasing contract for the prototype, which is a two-part hydrogen multiple unit.

According to Siemens Mobility and BRB, the prototype will be presented to the public in spring 2022. It will be put into test operation from mid-2023 on the Augsburg – Füssen line, among other routes. The operational tests on the network of the Bayerische Regiobahn (BRB) are initially scheduled for 30 months. The vehicle will begin official passenger services in January 2024.

According to earlier information, the two-part Mireo Plus H has a range of 600 kilometres – depending on operational conditions such as the season or the route. A three-part train variant could reach up to 1,000 kilometres. The drive power is 1.7 megawatts, the maximum speed 160 km/h. The German engineering giant also has a purely battery-electric train on the Mireo platform called Mireo Plus B, which will be used in Baden-Württemberg and East Brandenburg.

Arnulf Schuchmann, Managing Director of Bayerische Regiobahn, said: “Notwithstanding all the effort associated with the project, we are very much looking forward to the test operations in our rail network and the know-how we gain for using hydrogen technology in the rail sector. Together with the Transdev Group, to which we belong, and our entire on-site team, we will prepare the project in the best possible way in order to ensure a smooth test start next year.”

The signing of the contract followed a memorandum of understanding concluded between all parties in July 2021. Bavaria’s Minister of Economic Affairs Hubert Aiwanger and Minister of Transport Christian Bernreiter also attended the signing. “I am pleased that we will soon be able to use this innovative technology in Bavaria and also test it in regular operation,” says Bernreiter. Aiwanger adds: “Green hydrogen is becoming a key pillar for comprehensive climate protection in the areas of transportation, industry and energy.”