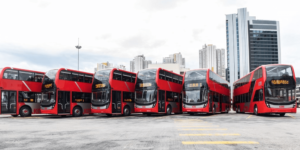 Ten battery-electric Enviro500EV three-axle double-deckers will be delivered to KMB in 2023 and will be ADL’s first electric double-decker buses in the Asia-Pacific region.

“We are delighted that KMB is continuing its commitment to innovation by choosing ADL for the development of an electric double-decker bus that will meet Hong Kong’s demanding operational requirements, which are among the toughest in the world,” said Paul Davies, President & Managing Director, ADL. “With the next generation of electric bus technology, fully integrated by our own engineers, we are now in a position to deliver a zero-emission solution for Hong Kong’s world-class transport system.”

“We acquired ADL in 2019 with a vision that it would drive our international growth strategy. Today’s announcement, combined with other contract wins in Germany, Ireland, and New Zealand, highlights that vision becoming reality,” said Paul Soubry, President & CEO, NFI. “ADL has long been the world leader in double-deck buses and will continue to lead this space through the transition to zero-emission.”

KMB operates on over 400 routes with around 4,000 buses, most of them double-decker buses, including more than 2,500 diesel-powered Enviro500 buses bought from ADL.