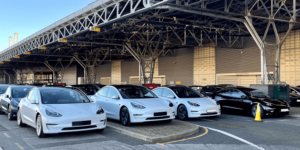 Breathe offers drivers a VaaS subscription, including insurance, maintenance and tyre replacements. It also allows drivers working for Uber or other hire services to choose between an ‘Everything Included Ownership’ model with the option to own the vehicle after four years, or an ‘Everything Included Rental’ model. The driver then subscribes for use on a weekly basis.

Today’s announcement on Breathe bringing in 100 Tesla Model 3 did not include any information on pricing or the amount of funding it received through the Mayor’s MEEF scheme. Jeff Davis, Director of Breathe only said their subscription options were “flexible and affordable”.

However, their website revealed prices start at 324 pounds per week for the rental model and 349 pounds when aiming for ownership. A quick calculation shows that at that price over four years with 52 weeks each, owning the Model 3 would cost a driver a whopping 72,592 pounds in the end. UK prices usually come in at about 42,000 pounds for a Tesla Model 3.

Regardless, Breathe says it saw a “huge demand for electric private hire vehicles, and MEEF’s funding allows us to expand our operations and help more drivers step into their first EV.”

For MEEF, it is the fund’s first investment to include both a debt and equity package. MEEF is being supported by Triodos, a leading sustainable bank, which has committed a significant part of MEEF’s capital for the project.

As for Zeti, the fintech company had previously received MEEF funding itself. Dan Saunders, CEO of Zeti, said, “Having begun as providers of pay-per-mile financing for taxi fleets, and now with this further expansion to other fleet types like PHV fleets and subscription services, it shows how scalable, sustainable solutions really are for tackling climate issues.”

Their project with Breathe will see Zeti provide the ZERO platform. It will enable Breathe and MEEF to monitor real-time data on vehicle telematics and the overall carbon savings of the fleet based on the total mileage.

Forecasts predict that the Tesla fleet will save 338 tonnes of CO2 per annum and achieve an annual average reduction in CO2 emissions equivalent to £5,137 in cost per tonne of CO2.

The partners have not stated when drivers may get the Model 3 vehicles in the first charge but the vehicle subscription packages are already online.

Why hire drivers need to go electric in London

The Mayor of London, Sadiq Khan, has committed to zero-emission transport in the capital, and the office has been working on many levels. One of the most potent instruments is the Ultra Low Emission Zone (ULEZ). The city has repeatedly moved forward with planned extensions. Earlier this month, the office proposed to expand the ULEZ to cover the whole of Greater London. The decision is subject to impact assessment, public and stakeholder consultation and confirmation by the Mayor in light of consultation responses received. If approved, it could take effect in 2023.

Electric vehicles are currently exempt from the Congestion, and the Ultra-Low Emission Zone (‘ULEZ’) charges to tempt people to transition to lower emission vehicles.

Uber, for example, is aiming to be an all-electric platform in London from 2025 onwards. In March 2021, the company launched its ‘Uber Green’ option, initially in London’s Zone One. Uber later wants to expand this option to the whole of the city – meaning that riders will be able to request an electric vehicle for the same price as a normal UberX. To incentivise the drivers, Uber says it ensures that they earn 13% more when taking trips on Uber Green. The company also started an EV project to install 700 charge points in three London boroughs throughout this year as reported.