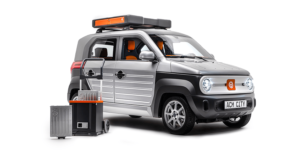 The end for the electric car start-up ACM Adaptive City Mobility from Munich now seems to be confirmed. After the company filed for insolvency at the responsible district court last year, according to a media report, investor Karl-Thomas Neumann no longer has any hope of a sale and continued operation.

The automotive manager confirmed on LinkedIn that ACM has been “insolvent for several months now”. He had been “working hard over the last few months to find a solution to buy ACM out of insolvency in order to save this great concept”. However, this “did not succeed, so that I now have to write off this investment”.

Neumann does not specify the sums involved in the post. However, the manager and investor linked to a Spiegel article in which ACM founder Paul Leibold allows journalist Thomas Geiger a test drive in the prototype. Unlike Neumann, Leibold wants to continue. “We won’t give up that easily,” Leibold is quoted as saying. If a sponsor can be found, series production is possible. ACM receives “incessant customer enquiries from all over the world”.

The only problem is that, according to Leibold, a lot of money is needed to develop the affordable and modular electric vehicle for emerging countries. “We are talking about a high three-digit million amount,” Leibold says.

Around the time of the insolvency filing in November 2021, Leibold had still stated that the goal was to “conclude the investor process for a continuation of the vehicle development as quickly as possible”. Strategic partners would be approached “quickly”.

This has not worked out in recent months – even with the support of Neumann – although the former Opel boss and Canoo manager not only has contacts in the financial scene but also, from his time at Continental, connections to suppliers and contract manufacturers. In the summer, Magna was signed as a development partner.

“You can’t always win,” Neumann now writes. “It was an attempt for a very good cause: the electric car for everyone and also for countries where there will be no usable charging infrastructure for many years to come.”

linkedin.com, spiegel.de (Paywall, both in German)

Porsche rumoured to be working on electric 911