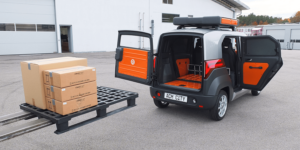 ACM Adaptive City Mobility GmbH is apparently targeting mass production of the ACM City One in 2024. The Munich-based company and contract manufacturer Magna have signed a letter of intent to jointly develop the City One to production readiness, according to a report.

ACM founder and CEO Paul Leibold plans to present the City One for the first time at the IAA trade fair, reports the Handelsblatt. In order to get out of the development phase with the vehicle, the company has prepared a feasibility study, he said. The test vehicles are to be produced in 2023, with series production starting at the latest in early 2024 in plants in Asia.

ACM published a preview of the series version of the modular electric vehicle and the associated ecosystem, which was created with federal funding, in June. At the same time, the company announced cooperations with the Porsche subsidiary MHP and the ex-automobile manager Karl-Thomas Neumann.

According to the Handelsblatt report, the company is currently in a new round of financing. ACM is in talks with several strategic investors, also from the Arab and Asian regions. According to Leibold, the interest is very high.

The City One is the result of around six years of development work – initially in the Adaptive City Mobility 2 (ACM) project from the “ICT for Electromobility” technology programme, and now under the direction of ACM GmbH. According to Leibold, the Stromer is particularly suitable for ride-hailing and shared mobility fleets – and in combination with a B2B pool-sharing platform that is intended to optimise vehicle utilisation and ensure energy supply around the clock. ACM brought Porsche subsidiary MHP on board to develop the digital platform.

The new version of the City One presented in June positions ACM in a niche – namely that for small, lightweight and therefore simple and affordable city electric vehicles that can be operated with low voltage due to their low weight. With its modular design, the 3.6-metre short and up to 110 km/h fast ACM City One can be transformed from a passenger car to a van in just a few steps, either to transport up to four passengers or loads with a load volume of up to 1,450 litres. A battery exchange system in combination with intelligent home charging should enable versatile use of the BEV.

A few days after the Handelsblatt report, ACM officially confirmed that it had won Magna as a development partner.

Whether Magna will also be involved in the series production of the City One as a contract manufacturer has not yet been confirmed. The current agreement concerns the series development of the vehicle.

Editor’s note: In an earlier version of this article, Magna was referred to as a production partner and not as a series development partner. We apologise for this error.

Schaeffler to drop 800-volt performance electronics at the IAA

BYD launches pre-sales of the Dolphin in China