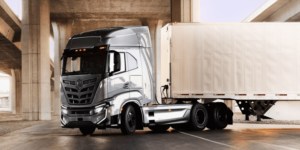 Nikola has started series production of its Tre battery-electric truck at its Coolidge plant in Arizona. The first deliveries are scheduled for the second quarter of 2022.

Shortly before Christmas 2021, Nikola had delivered the first examples of the BEV version of the Tre to logistics company Total Transportation Services (TSSI). However, the vehicles were still assembled on the pilot line. Subsequently, the company was able to conclude several orders and letters of intent.

How important the start of series production was for the markets’ confidence in the company is shown by the reaction on the stock exchange: there, the shares of the electric truck builder rose by 15 per cent. By the start of series production, Nikola had built 40 pre-series vehicles, 18 of which have already been delivered to customers. The remaining 22 vehicles are still in final inspection or awaiting delivery,

Nikola says it plans to deliver 300 to 500 of the battery-electric tractor units by the end of this year, subject to better availability of critical components. So the supply chain is likely to be the limiting factor rather than the production capacity, which was designed to be much larger according to the company’s earlier plans.

Nikola currently has production capacity for up to 2,400 trucks in two shifts at Coolidge and estimates that manufacturing capacity will grow to around 20,000 trucks by the first quarter of 2023.

On the sidelines of an investor day, the company also gave an update on the European production of the Nikola Tre: series production in Ulm for the European market is scheduled to start in June 2023. The plant was opened last September.