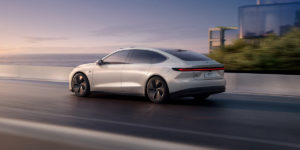 A few days after the start of series production, Nio has now officially started deliveries for its ET7 electric sedan in China as planned. The first ET7 vehicles were handed over to customers at the Nio headquarters in Hefei.

In February this year, Nio announced its flagship sedan ET7 for which the Chinese carmaker is already accepting pre-orders at prices starting at 448,000 yuan. According to today’s exchange rates this is equivalent to 63,350 euros.

The series production model was launched just a few days ago but at the start of delivery, the only available model is the “ET7 Premier Edition” with 100 kWh battery (instead of 70 kWh) and some special features (including Nappa Premium interior, 20-inch performance tyres and Nio’s Nomi Mate 2.0 digital assistant). This is priced at 526,000 yuan, which is equivalent to 74,400 euros at today’s exchange rate.

Since 5 March, test drives have been available to customers in more than 80 Chinese cities. The deliveries that have now started will “vary by region” due to the current Covid 19 outbreak, as was said around the production start-up.

Nio has said demand was very good, with trial runs leading to a “far higher than expected number of orders”. This bodes well for the company’s planned expansion into Europe. Nio is taking a wholistic approach to its electric vehicles, also eyeing up the potential for its battery-swapping stations in Europe. Nio already has 800,000+ battery-swapping stations in China and has already opened its first station in Norway. In April last year, Nio presented the second generation of its exchange stations, which can change up to 312 batteries per day.

Nio plans to launch in Germany in 2022 and has said that it would also introduce “its products and holistic service system to the Netherlands, Sweden and Denmark” this year. The first battery swapping stations has already been certified by TÜV in Germany.

Tesla gears up for stock split