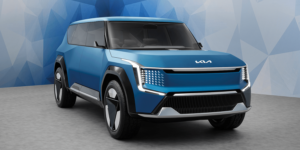 Kia revealed a large electric SUV concept based on the Electric Global Modular Platform (E-GMP) at the LA Auto Show in November 2021 named Concept EV9. Now the manufacturer has officially confirmed that the production version of the EV9 will also be available in Europe from 2023.

As a large seven-seater SUV, the EV9 Concept was clearly aimed at the American market. Around the European premiere of the concept, however, the carmaker made it clear that the production model of the E-GMP battery-electric car, expected in 2023, will also be sold here in order to “supercharge” the brand.

Exact technical data have not yet been confirmed, but so far a WLTP range of up to 540 kilometres and an electric all-wheel-drive with two motors are promised. This should make it possible to sprint from a standstill to 100 km/h in under five seconds. Kia has not yet named the peak charging power, but the EV9 should be able to charge 100 kilometres in six minutes. For the EV6 with 77.4 kWh and 240 kW charging power, Kia specifies 4.5 minutes. It is not known whether the 90 seconds are due to a larger battery or solely to the higher consumption.

The body design looks very bulky, at 4.94 metres the EV9 is not one of the largest electric SUVs on the market, but the vehicle is very tall overall. This applies to the ground clearance as well as the bulky front and the roof, which is over 1.80 metres high.

Which of the basic proportions will be retained in the production model and which design elements will make it into series production is still largely open – but the daytime running lights integrated into the painted front panel will probably not be included. Overall, however, the EV9 Concept is probably closer to the production model than many think. As Kia explained on the sidelines of the European premiere, the design of the EV9 was first determined for the production model and then the study was derived from it – not the other way around.

What is clear, however, is that the production model will have conventional doors – the counter-opening doors without B-pillars are only available on the concept car. It is unlikely that any elements of the interior will be copied 1:1, i.e. neither the floating seats nor the very open centre console without a partition in the footwell – in the EV6, the Kia design team had explained that they had deliberately decided on a partition in the footwell so that (unlike in the sister model Ioniq 5) no objects could slide into the driver’s footwell between the pedals.

In the EV 9, a variety of seat configurations are to be possible, similarly to a van. In the second row, for example, there will be two comfortable individual seats or a full three-seater bench. It is not yet possible to say anything about the third row of seats. The massive suspension of the rear-opening door takes up a lot of space in the rear – since this is omitted in the series, there could be more room for passengers 6 and 7 or luggage.

Sustainability was taken into account not only in the drive, but also vegan leather is exclusively used in the interior, and the proportion of recycled materials is increasing. The carpeting of the vehicle, for example, is made of recycled fishing nets.

The concept does not have a solar roof like the Hyundai Ioniq 5, but some solar panels are integrated into the front bonnet. Also interesting are details such as the retractable roof railing, which is only extended when in use – and is aerodynamically optimised when retracted into the roof.