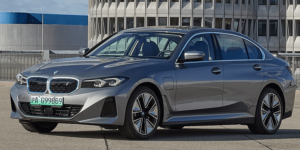 BMW has officially unveiled the all-electric 3 Series, which will be launched exclusively in China in May 2022. The model is called BMW i3 eDrive35L and will be manufactured at the BMW Brilliance Automotive plant in Lydia, a district of Shenyang.

The electric car has an output of 210 kW and a battery with a capacity of 70.3 kWh (usable: 66.1 kWh), which should be enough for a range of up to 526 kilometres according to Chinese standards. The battery of the BMW i3 eDrive35L can be charged via AC with up to 11 kW, via DC with up to 95 kW. DC charging powers far in excess of 100 kW are unusual in China due to the widespread use of GB/T standard charging stations there.

There have been reports about an electric version of the 3 Series Sedan for China for some time. In December, the first photos had also surfaced, published by the Chinese Ministry of Industry and Information Technology (MIIT). New models have to be registered with the MIIT before production starts.

However, the registration with the MIIT gave slightly different data, listing the model with an output of 250 kW. This corresponded exactly to the i4 eDrive 40 – i.e. the single-engine rear-wheel-drive version. With 210 kW, the electric motor in the i3 eDrive35L corresponds to that of the BMW iX3, which is also built by BMW Brilliance Automotive. The 35 in the model designation also already indicates that the 3 Series is slightly below the i4 eDrive 40.

However, this does not apply to the length: at 4.87 metres, the i3 eDrive35L is nine centimetres longer than the i4 (4.78 metres). Compared to the standard model of the 3 Series, the wheelbase has been stretched by eleven centimetres, according to BMW; the specified length is 2.97 metres. The i4 is eleven centimetres shorter, i.e. 2.86 metres.

Both the engine (5th generation electric drive) and the software (BMW OS8) of the i3 eDrive35L use the latest technologies from the BMW shelf. BMW itself writes that the model has “a wide range of state-of-the-art digital functions and services, such as high-end connectivity and the Digital Key”. The latter is used for the first time in a 3 Series.

The chassis was also designed with the Chinese market in mind: “Fine tuning of the BMW i3 eDrive35L’s suspension systems to Chinese road conditions has been carried out by the BMW Brilliance Automotive Ltd. R&D division in Shenyang, which also adapted some of the car’s componentry to the requirements of the supply chain in China.”

BMW has not announce prices for the i3 eDrive35L at this stage.

A few weeks after its unveiling, production of the BMW i3 eDrive35L has now started. The all-electric three-seater is manufactured at the BMW Brilliance Automotive plant in Lydia, a district of Shenyang. Lydia is BMW Brilliance’s third plant in the city. Only recently, the expansion of the Dadong plant was opened, the second plant is located in the Tiexi district.

With production starting and deliveries soon to begin, it is now clear how much the e-saloon will cost. Prices start from 349,900 yuan, which currently corresponds to just under 50,000 euros. This makes the i3 eDrive35L slightly cheaper than a Shanghai-built Tesla Model 3 Performance (367,900 yuan/52,200 euros), which does, however, have all-wheel drive. The basic Model 3 with LFP battery and rear-wheel drive is considerably cheaper at 279,900 yuan (around 39,700 euros).