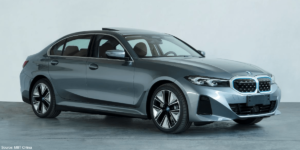 BMW is apparently planning a renewed expansion of its involvement in China. According to a media report, this not only involves an increase in shares in the BMW-Brilliance joint venture, but also several electrified models – but unlike the iX3, these are not to be built for the global market.

As the Handelsblatt writes with reference to group circles, the group wants to exercise an option in the first quarter of 2022 that secures it a further 25 per cent in the Chinese joint venture with Brilliance at a price of 3.6 billion euros. BMW already holds 50 per cent of BMW-Brilliance and would thus come to 75 per cent.

In addition, BMW is to prepare the production of two important models in China: Production of the X5, which is currently also built as a plug-in hybrid at the US plant in Spartanburg, is to be partly relocated to China. In order to keep the Spartanburg plant working at full capacity, the BMW XM plug-in hybrid, which was recently presented as a concept, is to be built there in return. Whether the aggressively designed PHEV SUV will be able to compensate for the lost volumes of the X5 is considered unlikely.

The background to these plans is said to be the high demand for the X5 in China. With local production, BMW wants to be able to better adapt the model series to Chinese requirements. The tariff dispute between China and the USA under former US President Donald Trump is said to be another reason. China has suspended the tariffs on car imports from the USA (25 per cent after all), but the conflict could erupt again.

CEO Oliver Zipse is also preparing the production of an electric version of the 3 Series in China, writes the Handelsblatt. This is to be offered only in China, in Europe only the i4 is to be sold. While a BMW spokesman confirmed the plans for X5 production in China to the press agency DPA, he did not want to comment on the “speculations” about an electric 3 Series for China.

We have found that they are more than speculations: The BMW electric 3 Series is already listed on the website of the Chinese Ministry of Industry and Information Technology (MIIT). New models must be registered with the MIIT before production begins. The vehicle shown there has a closed radiator grille (similar to the iX3), which is, however, as large as that of the combustion model – and not as conspicuous as that of the i4.

The length of 4.87 metres suggests that the electric vehicle model is based on the long-wheelbase version of the 3 Series. The power output is stated on the MIIT page as 250 kW, which corresponds exactly to the i4 eDrive 40 – i.e. the single-motor rear-wheel-drive version. The MIIT release does not contain any information on the battery or range.

Hyundai announces US pricing for the 2022 Ioniq 5