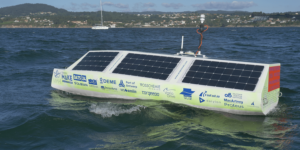 An all-electric boat has crossed the Atlantic Ocean. The ‘Mahi Two’ made the journey without a crew but powered by a Torqeedo electric motor and solar energy. They were being steered from the land through storms and high seas.

The Mahi Two team claims this to be the first solar-electric autonomous vessel to cross the Atlantic Ocean successfully. The ship left the coast of Spain in September 2021 and reached the island of Martinique in the French Antilles six months later.

Onshore, Pieter-Jan Note had tracked the small boat between high waves, navigating farther and farther away. “It felt like leaving your child alone in the ocean,” the Belgian engineer recalls. He and the team had done everything to make their four-meter boat robust and autonomous, reports Torqeedo.

The German company provided a Torqeedo Cruise 2.0 Pod electric motor that “goes on and on,” as Note found. Also on board were two 24 V batteries for which Torqeedo usually works with BMW. This time, the batteries were constantly recharged by Solbian solar panels.

In addition, the engineers had ensured that the watercraft could right itself in heavy swells. Cameras, sensors, satellite connectivity, and an onboard computer helped the Mahi Two keep upright for no less than 4,300 nautical miles, nearly 8,000 kilometres. The journey took half a year since the vessel travelled at speeds between five to nine knots, 10 to 15 kph.

The Mahi Two has a composite hull. It holds the steering, communication, hardware integration, navigation and energy management onboard – all managed by Mahi’s self-developed USV software. The boat communicates via an onboard satellite modem, GPS and automatic identification system. This helped the Mahi-crew to receive data updates every fifteen minutes – location, speed, solar power generated and some sensor data. Fans of the project could also follow the vessel in real-time on the website.

Only once there was a complete communication breakdown. Amid fears that the Mahi Two was lost, it resurfaced at its destination in Martinique two months later. The team says it was still analysing what happened between the communication breakdown and the successful landing. The USV captured 2.4 Terabytes of data which will be uploaded for other researchers to use.

Still, for the onshore crew, it is a huge success. The team has been working for years and lost two boats to the high seas. Now, the USV and motor made the difference. “Accessibility to low cost, high performance embedded systems made the project more feasible”, says Note, “and, of course, you need a reliable electric motor and a saltwater-resistant system that can power on and on.”

Torqeedo supported the project from the beginning with equipment and know-how.

Some of the Project Mahi team now started a company MAHI to bring maritime autonomy solutions to the market. They are developing software and hardware products that enable USVs to detect obstacles and other vessels accurately and avoid collisions according to International regulations.