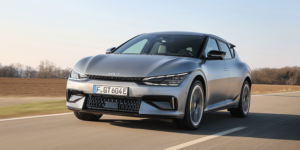 With 430 kW system power, the Kia EV6 GT is in a completely different league than anyone would have considered any Kia to be a few years ago. Instead of Seat or Skoda, the EV6’s most powerful offshoot compares with Porsche on paper. But does the comparison hold up in real life?

Actually, this car shouldn’t even exist. While Audi started developing the three-motor e-tron S variant and later derived the normal all-wheel-drive versions with two electric motors from it, the EV6 GT was not even in Kia’s spec to start with. In fact, when the E-GMP electric platform was being developed, the plans included no such powerful model, Albert Biermann, head of development at Hyundai-Kia until the end of 2021, reports.

One day, the Chairman came to him and asked if there was anything he could do to counter “the American EVs,” says the ex-BMW developer, who has since returned to Germany and is working as a technical advisor to Hyundai-Kia’s European development centre in Rüsselsheim. Biermann does not say whether the Chairman has just test-driven a competitor’s model or seen one of the countless videos on the internet showing a Tesla easily out-accelerating expensive sports cars. But he does say how the meeting with the Chairman continued: He asked for time to think things over and rounded up his senior engineers. They discussed the matter for several hours, drew up concepts and made initial calculations.

Just one day later, Biermann was able to give his superior the answer he had hoped for: “We can do it,” and with relatively minor design changes.

Kia proudly demonstrated the result at the world premiere of the EV6: In an acceleration race from a standing start, the prototype EV6 GT left vehicles such as a Lamborghini Urus, Ferrari California T, Mercedes-AMG GT and Porsche 911 Targa 4 behind. The fact that the car had to admit defeat to the McLaren 570S and that these were not the most powerful models of the manufacturers in each case probably did not matter much to the chairman. Just being named in a list with these brands and beating European sports cars with prices well into six figures in a Kia was triumph enough.

Kia aims to market launch the vehicle for 65,990 euros before the year’s end – with 430 kW and precisely the ability to annoy a Porsche or Ferrari at the traffic lights. But how did Biermann and his developers manage to turn a car that can be bought as a basic model for around 36,000 euros after subsidies into a Porsche shocker?

We weren’t allowed behind the wheel of the EV6 GT yet – there are too few pre-production vehicles in Europe, so the passenger seat will have to do for now. But here, too, the well-fitting but still comfortable bucket seats stand out. To maintain the character of a Gran Turismo, a high level of long-distance comfort remains important. After all, the EV6 GT is not intended to appeal to hobby racers for track days but to a well-heeled clientele that travels a lot and at high speeds. The Relax-Seats are not available in the GT because the decision was made for a bit more lateral support. By the way, everyday use was also a priority for the rear seat: Here, Kia decided against well-shaped individual seats. The cushions are quite flat since the rear seats’ backrests can still fold down.

A test and development driver sits at the wheel, which is better in the following demonstration. It’s not necessarily about acceleration but also what’s possible with the EV6 GT in the corners – more on that in a moment.

That the matte-grey prototype goes mightily forward is not only clear after the video of the quarter-mile sprint but also when looking at the data: Kia specifies 3.5 seconds for the sprint to 100 km/h. It doesn’t stop until 260 km/h. We didn’t reach this speed during our drive, but we can say that the acceleration slowly decreases from about 180 km/h onwards. However, the EV6 GT should still reach 200 km/h faster than the 58 kWh base model with 125 kW (8.5 seconds).

The special feature here is that “at its core, the rear engine of the GT is the same as the other variants,” says Biermann. With the 77.4 kWh battery, which is also installed in the EV6 GT, the output is 160 kW – regardless of whether it is the rear-wheel-drive or the all-wheel-drive model. The rotor and stator have been adopted 1:1. The only real design change: In the EV6 GT, the rear-mounted electric motor uses two inverters.

Each inverter, therefore, delivers its three-phase current to only half of the hairpin windings. Thus, Kia only needed to make changes in the periphery and the software for controlling the motor and could thus save an expensive new development – and still achieve 270 instead of 160 kW. By the way, Kia is not alone with this technical solution: Mercedes uses a very similar concept on the rear axle of the EQS, which the Stuttgart-based company calls a “six-phase engine”.

In addition, there is a more powerful motor on the front axle. Instead of 79 kW in the civilian all-wheel-drive model, the second PSM in the GT produces 160 kW. However, this was possible without any modifications, as the drive unit was designed for this output from the very beginning. The top model in the sister model Genesis GV60 also produces 160 kW on the front axle. In contrast to the EV6 GT, however, the Genesis has to make do with the three-phase engine on the rear axle for the time being. In total, this makes “only” 320 instead of 430 kW.

Since there are no changes in the battery compared to the other EV6 derivatives, the charging time also remains the same. With up to 240 kW at peak, the GT can charge from ten to 80 per cent in 18 minutes. To achieve the optimal charging curve even in adverse conditions, the Kia will also feature the announced battery preconditioning. On the AC side, it remains at 11 kW, i.e. a charging time of 7:20 hours to 100 per cent.

Another change is hidden behind the also new 21-inch wheels. The discs of the performance brake measure 380 millimetres in diameter, and the brake callipers are painted in a striking neon yellow. Neither the test driver nor Albert Biermann revealed the exact braking distance. Still, for a car with an unladen weight of just over two tons, the deceleration is more than adequate – probably also for the racetrack, but certainly for everyday use.

The lateral dynamics are almost exaggerated for everyday use. The EV6 GT takes fast corners with minimal lateral tilt and high stability, yet extremely fast lane changes are possible without the car swerving. Stable and agile at the same time. This is made possible by several modifications, as Biermann explains. Of course, the wide low-profile tires, new lower control arms on the front axle and the adaptive dampers on the chassis all help. And, of course, the car’s low centre of gravity thanks to the battery, as the former chief developer notes.

Adjustable dampers should also come in other E-GMP models

The adjustable dampers, in particular, would also be recommended (as an option) for the other E-GMP models. The prototype rolls quite comfortably in ‘Normal’ or ‘Eco’ mode despite the 21-inchers. It feels slightly louder inside, but that is probably due to the large rims and sports tires. However, the comfort is comparable with the civilian models. In ‘Sport’ or the special ‘GT’ mode (the latter activates via a dedicated yellow-anodized button on the steering wheel), the suspension becomes noticeably firmer and gives the driver more feedback. In the normal models, Kia could adjust the dampers’ range a bit in the direction of comfort. In the price range in which a well-equipped EV6 AWD moves, such a feature would at least be appropriate as an extra that is charged extra.

Apart from the front sports seats and the aforementioned GT button on the steering wheel, the changes in the interior are purely cosmetic. The ample rear-seat space is the same as in the familiar EV6 versions. The trunk also remains the same, with 490 litres to a maximum of 1,300 litres with the rear seat backrests folded down. While you’d rather not go weekly shopping with the competitor models from the drag race, it is easily possible with the EV6 GT.

This range from sporty handling and extreme acceleration to long-distance comfort and everyday utility is precisely the concept that has made brands like Porsche so successful in recent years and what the company has also brought to electromobility with the Taycan and its offshoots the Cross Turismo and Sport Turismo.

We don’t need to talk about the differences in the brand’s perception and one or two details in the interior here, and we don’t want to compare a Kia EV6 with a Porsche directly. However, after riding in the passenger seat, it becomes clear that the EV6 GT can do something similar for Kia as the Taycan did for Porsche: Show that a good and sporty everyday car can very well be electric.