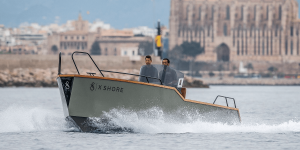 The Swedish electric boat manufacturer X Shore has raised 50 million US dollars in its new financing round. Among the new investors is Peter Carlsson, founder and CEO of the Swedish battery manufacturer Northvolt.

With the capital – equivalent to about 45.9 million euros – X Shore wants to increase production at its new plant in Nyköping, among other things. In addition to Northvolt CEO Carlsson, the board members and the existing owners of X Shore have also invested unspecified sums. It is not known what shares Carlsson will hold in X Shore in the future.

“The funding will be used to expand our production capacity faster and significantly reduce lead times for delivery,” says X-Shore CEO Jenny Keisu. “In addition, the funding will allow us to invest more in research and development as well as expand our distribution channels globally.” According to Keisu, the funding round was oversubscribed within two days.

Just in February, X Shore had placed an order worth €50 million with Austrian eMobility specialist Kreisel Electric to supply battery packs to the Swedish company. The exact order is for two Kreisel Battery Packs (KBP 63) with a total capacity of 126 kWh to be installed in each boat.

The X Shore Eelex 8000 is an eight-metre long and 2.60-metre wide electric boat. The maximum speed is 30 knots (55.5 km/h), the cruising speed is 20 knots (37 km/h). With its 225 kW motor, the Eelex 8000 is said to be able to accelerate to 20 knots in 4.2 seconds. With the 126 kWh gyro battery, the boat is said to be able to travel 100 nautical miles or 185.2 kilometres “at low speeds”. The eight-metre boat can be equipped with more than ten different superstructures to enable customers to choose the respective leisure use – from fishing boats to family boats “for socialising”, as X Shore puts it on its homepage.