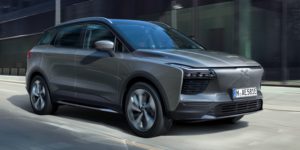 The Chinese electric car manufacturer Aiways has announced some changes for the 2022 model year of the U5. There are technological improvements, new names for the equipment lines and an adjusted price structure: it will cost around 3,500 euros more. In addition, the U6 is completing its final tests.

+ + This article has been updated. Kindly continue reading below + +

The minor model upgrades on the U5 include cosmetic changes, for example, the U5 can now also be ordered in grey. The electric drive remains essentially the same (150 kW output, the 63 kWh battery enables a WLTP range of up to 410 kilometres), but there is a change to the charging system: the new onboard charger enables three-phase charging with 11 kW, previously a maximum of 6.6 kW single-phase was possible. The charging time should thus be reduced from just under ten to less than six hours.

The DC charging capacity remains the same, with Aiways specifying 35 minutes from 20 to 80 per cent. In our test last year, we were able to achieve up to 93 kW of power at fast-charging stations. What is new is that instead of the Type 2 cable and the ICCB for Schuko charging, Aiways will in future deliver the U5 with a “universal ICCB charging cable”, “which facilitates access to three-phase 11 kW charging stations throughout Europe”. In other words, the U5 now comes with a mobile wallbox that enables charging at different connections using adapters.

There is also a small, further technical change: the antenna for DAB+ reception, which was previously placed in the windscreen, is now located outside the field of vision.

The two equipment lines basically remain the same but were renamed. The standard model becomes ‘XCITE’, the premium equipment will be sold as ‘PRIME’ in future. This basic model has, among other things, 17-inch aluminium rims, a dual-zone air conditioning system and some driving assistance systems. The ‘PRIME’ has 19-inch wheels, a tailgate that can be activated by remote control or foot control, front parking sensors and automatic parking aid.

Aiways’ second model, the U6 SUV coupe, completed its final winter tests in March. Prototypes covered more than 15,000 kilometres in temperatures below -30 degrees Celsius in China’s Heilongjiang province. According to Aiways, the model will be launched in China and international markets in the third quarter of 2022 – Aiways is currently active in 14 European countries.

“Aiways’ European journey is just beginning. With the introduction of the U5 SUV in 2020, Aiways became the first Chinese automaker to bring an EV to Europe,” says Alexander Klose, Vice President of Overseas Operations at Aiways. “We are now ready to follow that success with another compelling product that delivers on our brand ambitions. The new U6 SUV-Coupé marks the next stage in the company’s growth, and engineering tests like this ensure that our vehicles can compete on the international stage.”

Aiways is improving the usability of its all-electric SUV model U5 through a partnership with Pump, provider of an electric vehicle charging and navigation planning app in Europe. Aiways customers will be able to access the Pump app via their smartphone and display it in the vehicle monitor via Apple Carplay from 22 June to plan their journeys in advance and access detailed information about charging stations along their route including availability, exact location, provider details, average hourly usage and charging speed.

The Chinese electric car manufacturer Aiways is now offering its SUV model U5 with a retrofittable trailer coupling in a number of European markets. This can be retrofitted to vehicles from model year 2021 and can be obtained immediately in Germany, Belgium, Denmark and Sweden via local service partners. Others are being planned as required. Aiways states the maximum towing capacity as 1,500 kg for braked loads and 750 kg for unbraked loads, and the dynamic drawbar load as 100 kilos. Aiways does not state the price for the trailer coupling in the press release.