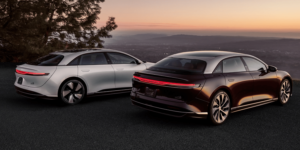 Lucid Motors has added a version to the model portfolio of its electric luxury sedan Air. With 783 kW, the Grand Touring Performance is the most powerful version of the Air. Deliveries in the US will begin in July 2022 with prices starting at $179,000.

When Lucid Motors unveiled the production version of the Air in 2020, four variants were announced: the base model with no added name, the Lucid Air ‘Tour’ (456 kW), the ‘Grand Touring’ (588 kW) and the 794 kW ‘Dream Edition’. Deliveries of the Air also started with this variant in October 2021. In the meantime, the first examples of the ‘Grand Touring’ – the version with the longest range and up to 837 kilometres according to the EPA – have been handed over to customers.

However, it must also be mentioned that Lucid has since revised the power figures quoted at the premiere in 2020 somewhat upwards – the ‘Grand Touring’ is now quoted at 610 kW, the ‘Dream Edition’ at up to 828 kW. However, the classification of the ‘Grand Touring Performance’ between these two models remains the same. With 2.6 seconds from 0 to 60 mph (96 km/h), the new model is also only 0.1 seconds slower than the ‘Dream Edition’.

In terms of equipment, both ‘Grand Touring’ versions are the same, performance or not. Features include the 34-inch glass cockpit with 5K displays, the ‘DreamDrive Pro’ driving assistance system with Lidar, 20-way adjustable seats (ventilated and heated) and the 900-volt fast-charging system.

Deliveries of the ‘Grand Touring Performance’ are scheduled to start in the US in July this year, and the model can be ordered at prices starting at $179,000 (165,000 euros). As reported last year, Lucid also plans to launch in Germany in 2022. It is not yet known which versions of the Air will then be offered at which prices.

Nissan presents the updated 2023 Leaf in the USA

Aiways presents 2022 model year of the U5 electric SUV