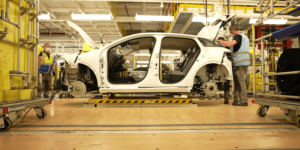 Renault has halted production of the all-electric Mégane E-Tech Electric in France. According to a French media report, production at the Douai plant will be suspended for the time being from 14 April to 25 April due to a shortage of semiconductors and a lack of parts from Ukraine.

The 2,300 employees of the factory will be put on short-time work, as Automobile Propre reports. The first examples of the Mégane E-Tech Electric, which have apparently already been produced, are to be handed over to customers in France in May as planned. However, deliveries of new units of the electric car to be produced will be delayed due to the production stop.

Renault is not the only manufacturer where the launch of a new electric model is compromised due to missing parts – VW, for example, had to postpone the launch of the ID.5. However, there is a big difference: at VW, the closely related ID.4 is still available (albeit with long deadlines), but the Mégane E-Tech is a completely new model and extremely important for Renault’s plans.

According to the report, it is not only the car plant in Douai that is concerned. The factory in Cléon, where the electric motors are manufactured, has already been subject to production restrictions since March.

Even before the production stop, Renault’s first import companies had drawn consequences: Renault Germany had already imposed an order stop for its electric models and plug-in hybrids at the end of March. Renault still wanted to sell up to 10,000 units of the Mégane E-Tech in Germany this year.

The Mégane E-Tech Electric is the first Renault model on the all-electric CMF-EV platform. The electric compact model is priced in Germany at 35,200 euros before subsidies. However, the entry-level model with 96 kW output and 40 kWh battery can only be charged with 7.4 kW AC, a DC charging option is only offered by the variant starting at 37,100 euros. For the top model (160 kW, 60 kWh, 22 kW AC charging capacity, 130 DC charging capacity), prices start at 41,700 euros.