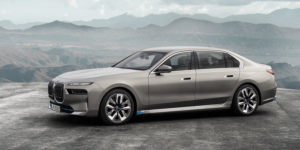 When it comes to the basic concept of the car, BMW has opted for a fundamentally different path than, for example, Mercedes with its competitor model EQS: while the Stuttgart company has famously separated the S-Class and EQS in order to build the electric sedan on an uncompromising electric platform, BMW remains true to its focus on a flexible platform even in the luxury segment. The i7 is part of the also all-new 7 Series. Both share a platform and also many basic design elements.

“The all-electric luxury sedan is a fully integrated member of the model family and clearly demonstrates how an exclusive driving experience and the ultimate feeling of on-board wellbeing can be combined with an unwavering commitment to sustainability,” BMW writes. “The generation change at the pinnacle of BMW’s model range is wrapped up in a new definition of luxury that focuses on the individual and their personal attitudes, needs and emotions.”

However, the needs of the different drive technologies were also important in the development: instead of battery and electric drives, the new BMW platform must also be able to accommodate petrol, diesel and a plug-in hybrid drive – the customer should decide at BMW, not the development or design department. This also ensures classic saloon proportions for the i7 – especially due to the long front bonnet, under which there must also be room for an in-line six-cylinder engine with eight-speed automatic transmission. And not just a relatively small electric motor.

Like the other current BEVs from BMW, the i7 uses the electric drive system of the fifth generation. These are current-excited synchronous motors that do not require rare earths, but rely purely on electromagnets in the rotor and stator. BMW has divided the motor construction kit into a scheme similar to clothing sizes and can thus combine the appropriate drive units on the front and rear axles with the respective battery depending on the vehicle and drive variant.

In the i7, there are initially two combinations of these. The entry-level model is called the BMW i7 xDrive60 and has an output of 400 kW. The i7 uses the same variants from the modular drive system as, for example, the iX xDrive50 and the i4 M50, which also has a power output of 400 kW: a 190 kW “M” engine is installed on the front axle and the “L” engine with 230 kW on the rear axle.

The big difference to the i4 is that while the latter with its 80.7 kWh battery can only hold the 400 kW for a short time in “boost” mode and is otherwise operated at 350 kW, there is no such restriction with i7 xDrive60, thanks to the 101.7 kWh battery. The system torque is 745 Nm, making a sprint from zero to 100 km/h possible in 4.7 seconds.

More than the pure acceleration experience and power delivery, the developers also focused on traction and driving stability. The intelligent networking of the fully variable all-wheel drive with the extremely fast controllable engines and the other drive and chassis functions is intended to ensure safe driving behaviour in adverse conditions – even at the electronically specified top speed of 240 km/h.

With WLTP consumption in the window between 18.4 and 19.6 kWh/100km (depending on equipment), between 590 and 625 kilometres of standard range according to WLTP are possible in the i7 xDrive60. The adaptive recuperation system, which has been further developed compared to the i4 and iX, should also contribute to this. In the i7, for example, the system reacts not only to bends and other vehicles, but also to traffic lights.

Since both i7 derivatives use the same battery with 101.7 kWh net, the charging behaviour is the same for both models: AC is charged with a maximum of 11 kW, DC up to 195 kW is possible – more than 200 kW would also not be possible for a car with 400 volts operating voltage and the current CCS standard (maximum 500 amps). Instead of maximum charging power, BMW focuses on making the best possible use of the available power of the 400-volt system.

For this purpose, the high-voltage storage system has its own 5.5 kW flow heater to bring the battery into the optimal temperature window before fast charging – as BMW points out, this not only works when navigating to a charging station, but can also be activated manually without active destination guidance.

During the fast charging process itself, cooling rather than heating is usually required. Here, the operating strategy has been optimised to prevent “overcooling”. In this way, the occurrence of temperatures that are too low for the cells should be prevented, especially during high charging states – which results in better charging performance and reduced ageing of the cells.

The charging software, which has been improved in comparison to i4 and iX, should ensure that the charging power is continuously reduced at higher charge levels – instead of the usual “staircase curve”. This makes the overall charging curve “fuller”, according to BMW. “For this purpose, the new process regulates after an initial, temperature-dependent and constant strpm phase to a continuous target voltage characteristic curve, which takes into account the state variables temperature, recharged capacity and fill level at the start of charging,” the statement says.

In some respects, the electric version has had an influence on the entire 7-series – for example in the aerodynamically retractable door handles, which are also available for the combustion engine. And the long version with stretched wheelbase, which used to be common for luxury sedans of this kind, is history: since the large battery requires a lot of installation space between the axles anyway, the long wheelbase of 3.22 metres (five millimetres more) has virtually become standard.

The long wheelbase and the slightly wider track also contribute to comfort. To ensure that the car still remains manageable in bends or in a car park, BMW has fitted rear-wheel steering, which should reduce the turning circle by 0.8 metres. An adaptive two-axle air suspension with electronically controlled dampers is standard. On the i7, the bi-directional hydraulic bearings on the rear axle are said to contribute to increased ride comfort.

BMW had already revealed the shape of the i7’s illuminated double kidney grille in a teaser image a few weeks ago – the contour illumination contributes “decisively to the impressive presence” of the BMW kidney. With the premiere of the new model series, it is clear that BMW has also opted for the two-part front lights on the 7 Series, as they were presented the week before on the facelift of the X7: Daytime running lights and turn signals form one unit, the main headlights sit below.

Since the new seven-generation has not only increased in length by 13 centimetres to 5.39 metres, but the car has also become 5.1 centimetres taller, the proportions of the saloon remain intact – it does not look as stretched as a flatter EQS. The rear view is characterised by horizontal lines, the LED lights extend far into the side sections – as is familiar from other BMW vehicles.

In the interior, too, the i7 looks somewhat more conventional than an EQS with the Hyperscreen. BMW also relies on digitalisation and installs large touchscreens – the highlight is certainly the 31-inch 8K monitor ‘BMW Theatre Screen’, which can swivel out of the roof and is intended to create a cinema atmosphere in the rear seat. In the front, despite the touchscreen with BMW.OS8, there is still the familiar BMW rotary-push control and also conventional steering wheel buttons, whereas others rely on touch-sensitive surfaces. However, the latter does not necessarily always pan out to be an advantage.

The luggage compartment volume of the i7 is 500 litres, around 40 litres less than that of the combustion engines. The maximum towing capacity for the 7-series has so far only been generally stated by BMW as up to 2.1 tonnes – which drive variant is involved and what is possible with the i7 is not mentioned.

The scope of delivery in Europe includes the BMW Charging Card (including one year’s access to discounted Ionity rates without a basic fee), a Mode 3 charging cable for public charging stations and a Flexible Fast Charger.

In Europe, only the i7 will be launched initially, with further (combustion) variants to follow – the PHEV has been announced for 2023. In the USA, China and “other selected sales regions”, two petrol engines and 48-volt hybrids will be offered alongside the i7 at the start of sales. BMW has not yet named prices in the announcement, but the configurator for the initially available i7 xDrive60 is now live: according to this, the model is available in Germany from 138,310 euros. With the M sports package, the price is 142,800 euros, and with the M sports package Pro, 146,500 euros.

The first production models of the new 7 Series have now rolled off the production lines at the BMW plant in Dingolfing, including the all-electric i7 offshoot. The BMW Group has invested more than 300 million euros in the Dingolfing plant for the production of the new BMW 7 Series. Once production has started and the dealership organisation has been supplied with display and demonstration vehicles, the 7 Series models will be available to customers all over the world from autumn.

The new 7 Series will be built on one assembly line in a mix with 5 Series and 8 Series models as well as the all-electric BMW iX. “The individual drive variants of the BMW 7 Series are 100 per cent interchangeable,” emphasises plant manager Christoph Schröder. “This enables us to build along the actual drive mix in demand and to utilise our plant to the best possible capacity.” The all-electric version of the 5-series is to follow next year.