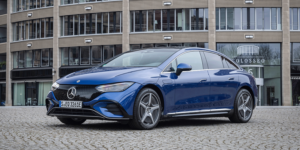 After Mercedes-Benz opened the order books for the first two variants of the EQE in March, there is now information on further EQE versions. Among them is not only the second AMG version, but also the entry-level engine.

The manufacturer has published technical data for the EQE 500 4MATIC, for which the sales release should take place in June or July 2022, according to the Mercedes-Benz Passion Blog – as well as for other variants: The EQE 300 with a rear-wheel-drive as the new entry-level version and the larger AMG variant EQE 53 4MATIC+. The EQE 350 4MATIC will follow later. The EQE 350+ (with rear-wheel drive) and the EQE 43 AMG 4MATIC have been available to order since March.

Now the Stuttgart company has published further data, but the information on consumption and range is still provisional. According to the WLTP standard, the 500 can travel between 503 and 590 kilometres on one battery charge, although the range depends on the equipment. For comparison: the EQE 350+, the version of the EQE with the longest range, covers between 567 and 654 kilometres. Mercedes provisionally quotes the consumption of the EQE 500 4MATIC at 17.8 to 21.1 kWh/100km.

The battery is the same in both variants: the variant with ten modules (in the EQS up to 12 modules) adds up to a usable energy content of 90.56 kWh. Since the nominal voltage is only 328.5 volts, the maximum DC charging power is limited to 170 kW. The usual charging window from ten to 80 per cent is given as 32 minutes. In 15 minutes, the 500 should have enough power for 230 kilometres in the battery. On the AC side, an 11 kW charger is installed ex-works, which means that a complete charging process takes 8.25 hours. With the optional 22 kW charger, it takes 4.25 hours.

The only thing is that Mercedes has not yet officially announced when the EQE 500 4MATIC will be available for order and at what price. As the Mercedes-Benz Passion Blog writes, this should be the case from June or July. However, the blog does not know the exact price either; it only mentions “not less than 87,000 euros”.

The situation is similar for the EQE 53 4MATIC+: The technical data of the up to 505 kW all-wheel-drive vehicle are already known, the price is not yet. According to the blog, the 53 will also be part of the sales release in the summer – at prices starting at “probably over 107,000 euros”. A small insertion about the model designation: In the EQ models, Mercedes marks the version with the highest range with a “+” – in this case it is the EQE 350+. In the case of the Mercedes EQE 53 4MATIC+, however, the “+” refers to the all-wheel-drive add-on 4MATIC and does not indicate the range, but rather the fully variable all-wheel drive of the AMG EQE.

The Mercedes-Benz Passion Blog also published its own estimate of the base model, which is presumably to be called EQE 300. The output is said to be 180 kW (instead of 215 kW in the EQE 350+), the range is given as a maximum of 636 kilometres. How Mercedes manages this – for example with a smaller battery or other cells – no Mercedes representative wanted to confirm on the sidelines of the driving event. The price according to the blog: From around 66,000 euros. This means that even the absolute basic version would no longer be eligible for subsidies from 2023, if the regulation is implemented as proposed by the BMWK. The subsidy would then end at a total gross price of 65,000 euros.