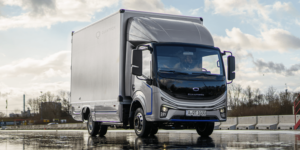 Although Quantron started out as an electrification converter for existing vehicles, it is increasingly developing into a full-range supplier of electric commercial vehicles. In February, the company based in Gersthofen near Augsburg presented its first own electric bus, the Cizaris 12, which is based on a chassis from partner EV Dynamics, but was adapted for the European market by Quantron.

The small electric truck Qargo 4 EV Light Truck is similar. The company sayss it is “developed and produced in cooperation with global partners from the Quantron ecosystem.” With vehicle modules from Asia from EV Dynamics and from the Spanish specialist QEV Technologies, Quantron adapts the vehicles “to European standards and individual customer requirements”.

The basis is always the same: the fully electric van with a payload of 2,300 kilograms and a gross vehicle weight of 4.5 tonnes offers a range of up to 350 kilometres with a battery capacity of 81 kWh. The Chinese manufacturer CATL supplies the cobalt-free LFP cells, as both Quantron and QEV are distribution partners of CATL.

The 81 kWh battery can be fully recharged in 1.2 hours. Quantron has not specify the charging time for the usual charging rate from ten to 80 per cent in this announcement. Quantron says that the Qargo can charge for almost the entire duration with the 60 kW in order to fully charge the battery in 1.2 hours. In purely mathematical terms, the 81 kWh should even be the gross energy content, 72 kWh should be usable. Because only then can 72 kWh of energy be transferred in 1.2 hours (or 72 minutes) at 60 kW. Consequently, the charging process from ten to 80 per cent would take 50 minutes.

The Qargo 4 EV is powered by a 120 kW motor. However, the focus of the vehicle is less on performance, as the light truck is to be used primarily in last-mile delivery. There, the top speed hardly plays a role, as the vehicle often starts and decelerates at low speeds. Therefore, values like manoeuvrability are more important: the Qargo has a wheelbase of 3.3 metres, which is almost on par with large electric cars.

At the event called Q-Days at the headquarters in Gersthofen, Quantron not only presented the Qargo as a new model. Other innovations in the Quantron portfolio include the all-electric QHD BEV 50-280 as a 4×2 tractor unit based on the DAF CF Space Cab. With a battery capacity of 280 kWh (no indication whether gross or net), the e-tractor should have a range of 220 kilometres.

The battery can be charged with up to 150 kW DC and should be fully charged in two hours. Alternatively, AC charging with up to 44 kW is possible – then it takes 6.5 hours for a completely empty battery to reach 100 per cent charge. The engine power is up to 350 kW, the power is transmitted to the wheels via a fully automatic six-speed gearbox.