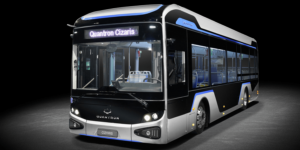 Quantron has unveiled its first all-electric city bus, the Cizaris 12 EV. The vehicle is also the first in the company’s new design. Designed for urban transport, the Cizaris is equipped with lithium iron phosphate batteries from CATL and a central synchronous motor from Dana.

The Cizaris represents the entry of the company, which was spun off from Haller GmbH in 2019, into the sustainable and tender-driven city bus market, Quantron says. Designers built on a vehicle platform previously proven in service in Asia. Brand-typical design features and customer-specific adaptations will be made at Quantron’s Augsburg-Gersthofen plant.

The bus will be launched as an all-electric version, and in 2023 the model will also be available with a fuel cell drive (Cizaris 12 H). For the market launch, the sales focus will initially be on the markets of Eastern Europe, the Middle East, Scandinavia and Southern Europe. Due to the special requirements of the German market, the market launch in Germany, Austria and Switzerland will not take place until the second half of 2022.

Quantron is relying on a combination of lithium iron phosphate batteries and a synchronous central motor from Dana/TM4 for the bus. The battery packs from partner CATL – with a choice of 242 to 424 kilowatt-hours – are mounted on the roof. They can reportedly be fast-charged with 65 to 150 kW of direct current (DC) in two to five hours. In the medium-heavy eSORT 2 cycle, that energy is enough for 220 to 370 kilometre (220 to 370 mile) circulations at a do-duty-discharge (DoD) of 10 per cent, the company writes.

The vehicle-mounted and water-cooled Dana/TM4 central engine based on the permanent synchronous principle (PSM) has a nominal/maximum output of 145/245 kilowatts and a maximum engine torque of 1,055/3,329 newton meters. With the introduction of the fuel cell version, an even more powerful powertrain is to be installed.

Quantron provides a two-year warranty on the complete vehicle, and eight years or 3,000 charge cycles (or 80 per cent charge capacity – whichever comes first) for the batteries.

The Cizaris carries the upgraded Quantron lettering and new logo, and appears in selectively placed colour tones that Quantron calls ‘Absolute Zero Blue’. The bus offers 24 to 35 seats and – depending on the battery package – has room for a total of 81 to 95 passengers, including standing passengers.