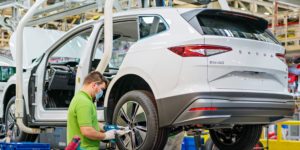 The Czech VW brand Skoda is ramping up production of its all-electric Enyaq iV at its main plant in Mladá Boleslav. Production had to be interrupted for a few weeks due to supply bottlenecks for wiring harnesses.

Like the production of the other MEB models at the VW plant in Zwickau, the Enyaq production was among the first plants that had to be shut down at the beginning of March. As it turns out, a large part of the wiring harnesses for the MEB models come from a plant of the supplier Leoni in the region around the western Ukrainian city of Lviv.

Skoda says that capacity is to be ramped up successively over a period of two months. When production resumes, about 1,000 Enyaq iVs can be produced per week. In the long term, the plant in Mladá Boleslav will produce up to 370 Enyaq iV and Enyaq Coupé iV per day. That would be a calculated 2,590 vehicles per week.

The statement said that it had succeeded in “restoring the supply of essential components so that production can be resumed”. The long-term goal is to maintain full production capacity. “However, this is dependent on the availability of certain parts and it is currently not possible to make any predictions about the supply chains,” the Czech company stated.