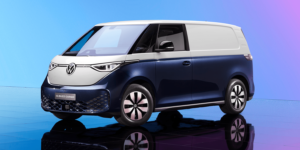 According to the current list of the Federal Office of Economics and Export Control (BAFA), which is responsible for electric car subsidies, the ID. Buzz Pro with 150 kW power and 77 kWh battery will be offered in Germany from a net list price of 54,270 euros. Adding VAT results in a price of 64,581 euros. Subtracting from this the environmental bonus, which is still valid, results in a price of 56,606 euros. With a net list price of more than 40,000 euros, the ID. Buzz qualifies for the reduced environmental bonus.

For the Cargo variant, list prices start from 45,740 euros net at launch. The market launch of the Cargo model is planned for this month.

With these prices, the passenger car version of the ID. Buzz is significantly higher than the ID.4 with the same battery-drive combination. The ID.4 is listed at a gross price of less than 45,000 euros. However, it remains to be seen whether Volkswagen can actually sell the ID. Buzz for 64,581.30 euros or whether the price will be adjusted. In the case of the commercial vehicle variant, on the other hand, the focus on the net price, which is important for commercial customers, is understandable.

VW Commercial Vehicles presented the ID. Buzz in March as a series version. Initially, there is only one drive variant, but other versions such as an all-wheel-drive offshoot or a smaller battery are to follow in time. Another body version besides the 4.71-metre-long model is also planned.