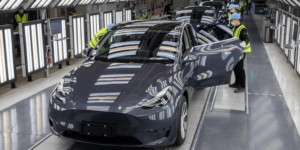 Tesla is aiming to increase production at its Shanghai plant to 2,600 cars per day starting May 16. The company plans to do so by expanding production to additional shifts.

Reuters reported, citing an internal memo from the electric car maker. Tesla, which has operated only one shift since resuming production in Shanghai, plans to add more shifts at its Shanghai plant starting May 16 to bring production back to the level it was at before the city shut down to fight Covid-19. In March, the plant was operating with three shifts.

Elon Musk had previously hinted that Giga Shanghai could set a new weekly production record this quarter. Expansion work had been underway since February, before the Corona Shanghai lockdowns, but the full impact of that work was not visible because of the factory closures.

With the information from Reuters, the estimates of analyst Ming-Chi Kuo seem to be confirmed. The latter had stated on the resumption of production that Tesla could “in the best case” switch back to a two-shift system in mid-May.

The limiting factor for Tesla to ramp up production was not the personnel that Tesla was able to bring into the factory with the help of the authorities, but the parts. As Reuters now writes, the wiring harnesses were also a major issue at Tesla, in this case coming from Aptiv. Aptiv itself had received approval to resume production at the end of April. As the supplier confirmed to Reuters, all supplied wiring harnesses are said to come from Aptiv – in the meantime, there were reports that Tesla had also purchased wiring harnesses from other sources in order not to jeopardise the production ramp-up.

At the beginning of May, Tesla had confirmed its intention to build a second plant in Shanghai. That’s according to a letter from the automaker to the Lingang Special Area authorities, in which Tesla thanked them for their support in restarting production. The new plant is to be built in the immediate vicinity in the Lingang Industrial Area and will have a capacity of over 450,000 vehicles per year.

Tesla is apparently forced to halt most of its production at its Shanghai plant due to problems sourcing parts. As Reuters writes, citing an internal Tesla memo, fewer than 200 electric cars are to be built in Shanghai on Tuesday, far less than the roughly 1,200 units per day to which the plant ramped it up shortly after reopening on 19 April following a 22-day closure.

This means that the planned increase to 2,600 cars per day from 16 May is probably also in doubt. Tesla would not comment on the information when asked by Reuters.