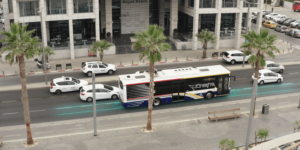 This is the second deal from Israel for ElectReon, where the company is also working with Dan Bus Company as reported. There they are to expand the wireless charging network in Tel Aviv and the wider area.

The new deal with Electra Afikim, Israel’s fourth-largest bus operator, has already been signed. The operator expects ElectReon to equip a bus depot that houses 30 buses.

CEO Oren Ezer told Globes that the project in Rosh Ha’ayin is “fairly unique”. Bus drivers stop and charge there day and night. “This means that, through this project, we will be able to demonstrate how we transmit energy 24 hours a day, which allows smaller batteries can be installed on the buses,” he added.

Dan Bus in Tel Aviv had pointed to similar advantages since high power connections to Israel’s power grid appear challenging and “bureaucratic”, also according to Cohen of Electra Afikim.

However, the announcement today did not include technical details, e.g. on how much energy or charge power ElectReon hopes to deliver at the depot in Rosh Haayin.

The city’s municipality has undertaken to the Ministry of Transport to make the land in question available for ten years. ElectReon’s contract includes support and operating services for the next twelve years. The deal is worth NIS 6.5 million (about 1.8 million euros).

ElectReon has projects in other countries as well and has been noted for “SmartRoad” installations in Sweden and Finland, the US, Germany, and Italy.

EVgo enters partnership with the City of Portland, Maine