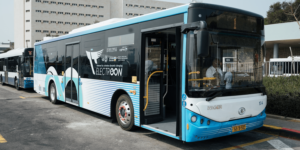 In Israel, ElectReon, a company specialising in inductive charging of electric vehicles, has signed a 5-year contract with the Dan Bus Company. The contract provides for an expansion of the wireless charging network for public electric bus lines in Tel Aviv and the wider area.

The establishment of the network will enable the inductive charging of 200 electric buses at existing bus stations. In the first phase of the project, 100 buses will initially be prepared for inductive charging at the Reading transport terminal in the north of Tel Aviv. In the second phase, the charging infrastructure will be extended to other major terminals in Tel Aviv and southern Israel, as well as to another 100 electric buses. ElectReon estimates the total cost of the project at 9.4 million dollars (about 8.1 million euros).

Inductive charging will be used to recharge the buses between journeys and while passengers are boarding and alighting. It is therefore a static charging process. ElectReon is also known to be experimenting with dynamic charging while driving.

The Dan Bus Company is expected to benefit from ElectReon’s charging technology in several ways: First, it could reduce the capacity needed to connect to the power grid at bus stations, and second, it could reduce the capacity, size and weight of vehicle batteries, according to an accompanying release. Under the contract, ElectReon will take care of the installation and complete charging service, including maintenance, and Dan Bus will pay a monthly fee in return. In addition, the partners intend to explore the possibility of transferring the wireless charging system to the rest of Dan Bus’ electric vehicle fleet and highway project “Netivei Ayalon”.

“Not only will this be ElectReon’s first large-scale commercial project, it will also be a world-class showcase of wireless EV charging for fleet vehicles,” says Oren Ezer, CEO of ElectReon. This will demonstrate the improved efficiency and cost savings that electric bus fleet operators can expect by implementing a wireless charging infrastructure, he said.

“We have tested ElectReon’s technology and it has proven to be suitable for top-up charging at operational terminals as part of our day-to-day operations and workflows,” added Ofir Karni, CEO of Dan Bus Company. The new technology allows for greater ranges and longer operating times, while at the same time cushioning peak energy consumption loads from overnight charging at depots.

The 5-year agreement extends a collaboration between ElectReon and Dan Bus Company that began in September 2019. At that time, the partners launched a pilot project in the course of which Dan Bus buses were wirelessly charged while driving on a 600-metre stretch of road in Tel Aviv. The route is located on a total of two kilometres of bus route that leads from the Tel Aviv University Bus Terminal to Klatzkin Street in Ramat Aviv. The project is supplemented by stationary inductive charging at the bus terminal at the beginning of the route.