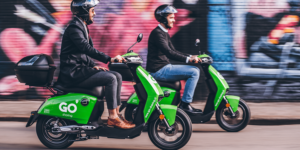 Go Sharing points to a new kickstand, passenger footrests, and a new helmet top box and undetachable mirrors. The improvements result from analysing user data, feedback and testing at their new, 2,000m2 R&D facility in Den Bosch, the Netherlands, so the company.

For example, some users struggled to get the e-moped on its trestle stand, while a side stand was not stable enough. Go Sharing now developed a buck stand that can easily be operated “with even one toe”, so the statement.

Other design features include said new footrests for passengers and a bell instead of the horn that sometimes startled fellow road users, Go Sharing reports.

For the new helmet top case, this is due to the new helmet requirement coming in in the Netherlands this July. However, the e-mopeds had always been equipped with two helmets.

Go Sharing says there are some improvements without going into detail in terms of technical data. The vehicles generally have a top speed of 45 kph so that anyone with a valid driver’s license (AM or B) can use the app to book a ride. There are also slower models capped at 25 kph, e-bikes in the strict sense. Apart from an unlock fee of €0,50 (25 km/h moped) and €1- (45 km/h moped), people only pay for the time they rent an e-moped. According to the Go Sharing website, prices start from € 0.23 per minute, without registration and other hidden costs.

Go Sharing was founded in 2019 and now claims more than 40 million kilometres have been driven with the green shared e-mopeds. The company is currently active in five countries with more than 10,000 shared vehicles and says that is why it decided to do the R&D in-house. The new development department sits in a 2,000 m2 warehouse in Den Bosch, the Netherlands.

In their home market, Go Sharing covers about 30 locations. Internationally, most country chapters include only the big cities: Belgium (Antwerp and Brussels), Austria (Vienna), Italy (Florence, Milan, Rome and Turin) and Turkey (Istanbul).

Gogoro to expand to Israel