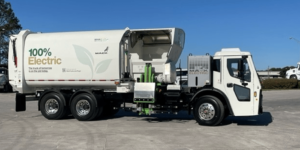 The Mack LR Electric, introduced in the latest version this March, offers 42 per cent more energy through 376 kWh battery capacity for the increased range between charges. Twin electric motors with 448 continuous horsepower drive the vehicle.

Mack Trucks has made the electric refuse truck building on its diesel-powered models. This was also why Ocala, Florida, opted to collect garbage silently. “Mack has an excellent reputation for building refuse vehicles, so they fully understand the complexities associated with the collection of garbage and waste disposal,” said John King, fleet and facilities director for the City of Ocala. “We have a longtime relationship with Mack and have many diesel-powered Mack trucks in our fleet, so our technicians are familiar with the vehicles.”

The Mack LR Electric may be fitted with equipment bodies from numerous manufacturers, e.g. same driver/passenger side driving configurations, seating choices and door options are available for the LR Electric as for the diesel-powered Mack LR model.

The vehicles in Florida run on four NMC batteries and can recuperate energy from the hundreds of stops an electric garbage truck makes each day.

What is more, the cost savings are “huge,” King added. “Our residential diesel-powered refuse vehicles travel 75 miles per day, servicing about 1,000 homes. That’s about $145 in fuel consumption, per truck, per day. The electric vehicle costs about $30 to charge it,” he explained.

The City of Ocala received a 2020 grant from the Environmental Protection Agency (EPA) to help with the purchase. Ocala also received an additional $1 million grant to buy four more electric vehicles.

Nextran of Lake City, Florida, will service and support the vehicle.

The same is true for the refuse truck coming to Miami-Dade. It is the first fully electric garbage truck being added to the fleet, and service is also with Nextran. Otherwise, the Mack LR Electric features the same technology here.

However, the truck will be charged by energy from the garbage it collects since Miami-Dade runs the Resources Recovery Waste-to-Energy facility. It creates enough electricity from the waste collected in the county to supply its own needs and generate revenue for the county, so Mack.

“The Mack LR Electric vehicle will be powered by the garbage it collects,” said Danny Diaz, director of fleet management for the Miami-Dade County Department of Solid Waste. “We are closely monitoring electric vehicles, and we plan to purchase more – especially when you factor in the savings on fuel and maintenance.”

Mack Trucks is a Volvo Group subsidiary in North America. They had prototyped the LR Electric refuse truck in 2018 and trialled it with New York City’s Department of Sanitation first. Series production started in December 2021 in Pennsylvania as reported.