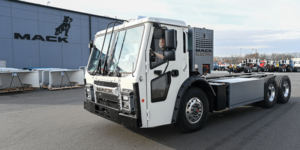 The US commercial vehicle manufacturer Mack Trucks, part of the Volvo Group, has started series production of its first all-electric heavy-duty truck at its plant in Macungie, Pennsylvania. The first orders have been placed since June.

The Mack LR Electric, with a gross vehicle weight of 66,000 pounds (30 tonnes) and a payload of 11.5 tonnes, is powered by two electric motors that together deliver 334 kW of continuous and 400 kW of peak power and has four battery packs with NMC cells that can be charged at up to 150 kW. There are no details on battery capacity, but the range is said to be up to 70 “on-the-job miles”, the equivalent of 112 kilometres.

In this case, it is not easy to give a realistic range: Mack states that the batteries supply energy not only to the drive, but also to other auxiliary consumers that are operated via circuits with 12, 24 or 600 volts. This means that the partly energy-intensive auxiliary consumers have a great influence on the actual range. Added to this is the changing load.

To increase efficiency, the Mack LR Electric has a regenerative braking system. Recuperation can be selected in three stages. Mack’s vehicles are often used in waste disposal, where many regular stops are part of the driving profile – and recuperation brings significantly more benefits than in a long-distance truck.

“Mack has long been a leader in the refuse segment, and we couldn’t be more pleased to now be producing Mack LR Electric vehicles to help our customers meet their sustainability goals,” said Jonathan Randall, senior vice president of sales and at Mack Trucks. “Customer response to the LR Electric has been overwhelmingly positive, and we look forward to putting more into fleet operations now that we are in production.”

The New York City Department of Sanitation (DSNY) has had a pre-production vehicle in test operation since September 2020. Then in June, it was announced that DSNY plans to purchase seven Mack LR Electric refuse trucks. Another demonstration vehicle is in operation at the waste disposal company Republic Services in Hickory, North Carolina.

First Nikola Tre trucks arrive at the Port of L.A.