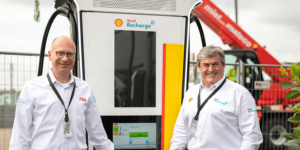 ABB E-Mobility and Shell are planning to set up the first Germany-wide network with ABB’s Terra 360 fast charging station. More than 200 charging stations, each with a capacity of up to 360 kW, are to be put into operation over the next twelve months.

In September 2021, ABB introduced the Terra 360, capable of charging up to four vehicles simultaneously and notably is powerful enough to not only charge cars and vans, but also trucks. The first examples went into operation in Norway at the beginning of May.

When it was unveiled last year, ABB said the fast-charging station was particularly suited to petrol stations, shops and shopping centres, but could also be installed on commercial sites owned by businesses. Thanks to the high power level, the Terra 360 is also suitable for fleet operators of commercial vehicles. While the commissioning in Norway still took place at a shopping centre, among other places, this is now also happening at petrol stations.

Over the next twelve months, Shell plans to install 200 ABB Terra 360 charging columns at its own filling stations in Germany. The two companies have not yet revealed exactly which locations will be equipped with the new charges, but István Kapitány, Global Executive Vice President of Shell Mobility, revealed: “Through our partnership with ABB, we are pleased to offer our customers the fastest charging available first in Germany and soon in other markets.”

The new order comes as little surprise. Shell has also relied on ABB charging columns for some time. The Swiss-Swedish company also announced just last month that it had signed a new global framework agreement with Shell to supply its full portfolio of AC and DC charging stations. Shell reportedly intends to operate 500,000 charging points worldwide by 2025. By 2030, this number is to increase to 2.5 million. To achieve this goal, the mineral oil company needs one thing above all: a lot of charging stations.