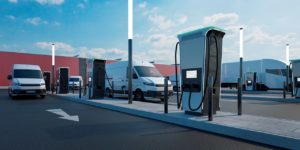 ABB has revealed the Terra 360, a new charging station for electric vehicles with a maximum power of 360 kW that can charge up to four vehicles simultaneously.

According to the Swiss-Swedish company, the Terra 360 “enables the fastest charging process on the market”. ABB says the ultra fast-charging station can deliver 100km of range in less than three minutes.

The new charging station has a modular design and uses dynamic power distribution so that it can charge four vehicles at the same time. With 360 kW, the station is also suitable for vans and truck fleets, which makes it ideal for commercial premises as well as public charging stations and shopping centres. The station is also wheelchair accessible and ABB says that the device requires minimal effort to plug in quickly thanks to an ergonomic cable management system.

As is usual with charging stations, the Terra 360 chargers are fully customisable so that entities operating the stations may put their brand on the stations with different foiling or selecting a specific colour scheme for the LED light strips. Advertising is also possible on the station, with an option to include an integrated 27″ screen for images and video.

The Terra 360 will be available in Europe from the end of 2021, and in the USA, Latin America and Asia Pacific regions in 2022.

It was only in April that ABB presented the third generation of its Terra HP (High Power) fast-charging station. The further development of the second-generation Terra HP, which so far has over 2,500 installations, can charge an electric car with up to 350 kW and 500 A or two vehicles at the same time with up to 175 kW and 375 A. Visually, the Gen III resembles the second generation. With its LED lights in the recess, the nearly 2.50-metre-high column is designed to make it easier to find the charging station in a large car park and illuminate the charging point at night.

ABB is arguably one of the largest companies internationally when it comes to electric vehicle charging needs. The electronics and engineering company is 130 years old, entering the emobility market swiftly and decisively in 2010. In the meantime, the Swiss-Swedish firm makes charging facilities for electric cars, vans, buses, trains, trucks, port logistics vehicles, yachts and ferries across the globe and is developing hydrogen fuel cell technology for larger ships.  The company employs around 105,000 employees in over 100 countries and is also involved in innovation in Formula E World Championships electric car racing, as well as projects in wireless charging for vehicles in motion embedded in roads.