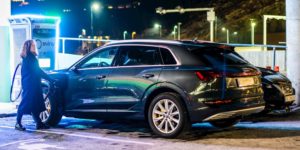 ABB has carried out the first installations in Norway of its Terra 360 charging station. The fast charger was unveiled last year with a capacity of up to 360 kW.

ABB and Eviny have put the Terra 360 into operation in the Oasen shopping centre in Bergen and in the Norwegian ski resort of Geilo. These pilot installations are to be followed by a wider roll-out in Norway and Sweden.

Thanks to dynamic energy distribution, the charging stations can charge two vehicles simultaneously. The maximum power is 360 kW, allowing a range of 100 kilometres in less than three minutes. ABB says it takes 15 minutes or less to fully charge an electric vehicle – provided that it is capable of charging at this power level. This power level is also sufficient for larger vans and trucks. Considering the current array of electric cars on the market, 2 x 180 kW is likely to become the much more important application.

Eviny already has more than 400 fast charging stations at over 150 locations across Norway. According to CEO Jannicke Hilland, ABB’s Terra 360 is the best choice for Eviny’s latest network expansion. “The transition to electric mobility is happening at a rapid pace here in Norway, and to continue leading the change we need the fastest chargers,” she continues.

Frank Muehlon, CEO of ABB E-mobility explains: “Norway is setting the global standard when it comes to the e-mobility transition and we are excited to hear the reaction of EV drivers in one of the most advanced nations for EV adoption.”

ABB unveiled the Terra 360 in September last year. According to the Swiss-Swedish manufacturer, the charging system is particularly suitable for petrol stations, shops and shopping centres, but could also be installed in commercial areas of companies to supply cars, delivery vans and trucks with power. In addition to the high charging power, ABB highlights the charging station’s modular design and small footprint of the column so that it can flexibly fit into various installation situations.

Drivers using the station are kept informed of the battery’s state of charge and the time remaining until the end of the charging process via an illumination system. Among the design options that can be selected is an integrable 27-inch screen for playing videos and images. The charging cable is relatively long at 5 metres and the station is also accessible for wheelchair users.