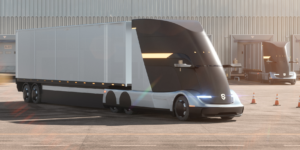 The startup says that the autonomous electric truck will be trailer-agnostic and is built to integrate with all standard loading docks. The truck should be able to haul an equivalent weight to current Class 8 trucks. The makers say that the sensor arrangement will allow for the easy integration of any autonomous driver system and features a proprietary software control interface.

“We look forward to being the step change this massive industry needs as we develop innovative technologies to deliver a battery-electric long-haul Class 8 truck with over 500 miles of range,” said Graham Doorley, Founder and CEO, Solo Advanced Vehicle Technologies. “Autonomous systems today won’t work on existing or retrofit platforms at scale. At Solo AVT we’re solving both of these challenges as we develop, design, and engineer the SD1 to achieve over 500 miles of range with an autonomous truck from day one.”

The seed funding just announced was led by Trucks VC with participation from Maniv Mobility and Wireframe Ventures. The startup was founded by alums from Waymo, Tesla and BMW.

Jeffrey Schox, General Partner, Trucks VC said: “When I was a young engineer working on GM’s first electric vehicle, I don’t think I could have imagined a world of zero-emission, automated trucks. Solo has the opportunity this decade to transform how we move goods cleaner and more safely.” He extrapolated: “The investor syndicate that Graham and his team have brought together at this seed stage will be essential for Solo’s future financial strategy, IP portfolio, and technical success. This is a global opportunity and it’s important to have such a strong early group to support Solo as the company takes these next vital steps.”