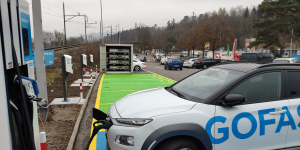 The electromobility roadmap that has been running in Switzerland since 2018 will be strengthened and extended until 2025. With a “broad range” of new and updated measures, the new ambitious goals are to be achieved by the end of 2025.

Representatives of the automotive, electricity, real estate and fleet sectors as well as the federal government, cantons, cities and municipalities launched this new stage of the roadmap with their signatures on 16 May. 75 measures are to contribute to the achievement of three defined goals.

In view of this, Federal Councillor Simonetta Sommaruga, head of the Federal Department of the Environment, Transport, Energy and Communications (DETEC), suggested extending the roadmap until the end of 2025 with ambitious targets. According to the press release, the new objectives were jointly developed in workshops, a top-level meeting and a written consultation of the roadmap stakeholders.

Three new goals were defined for the new stage: By the end of 2025, the share of electric cars and plug-in hybrids in new registrations is to reach 50 per cent. In addition, 20,000 public charging stations are to be available in the same period. At the beginning of 2022, there were around 7,150 publicly accessible charging stations. Thirdly, the goal of “user-friendly and grid-friendly charging – at home, at the place of work and on the road” was set.

A full 59 organisations are shaping the Roadmap 2025 with 75 measures, including 44 new and 31 adapted or extended measures. A “centrepiece of the new stage” are the cross-actor measures that address “particularly relevant challenges”: Charging in multi-party buildings, charging in neighbourhoods and the circular economy of traction batteries (reuse as second-life batteries and recycling).

The Swiss government sealed the start of this new stage on 16 May 2022 at a signing event with Federal Councillor Simonetta Sommaruga in Biel at the Switzerland Innovation Park. The Roadmap Electromobility is also open to other interested organisations and companies that also want to contribute to the achievement of the goal.