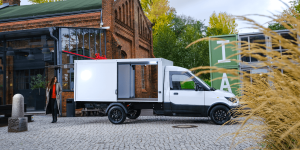 Odin Automotive has announced its change of name to B-ON and a partnership with the Hitachi Group following the acquisition of Deutsche Post’s StreetScooter business. Under the new name, besides offering vehicles, the company will be offering a range of new services.

These services are to include service and maintenance, charging infrastructure and energy management, telematics and fleet management software and even drivers. These will be delivered through a combination of internal capabilities and external partnerships. For charging infrastructure and energy management, B-ON is partnering with Hitachi. Hitachi Venture, Hitachi’s venture capital company, will also become a shareholder.

“Acquiring StreetScooter earlier this year gave us a great head start, providing the vehicle piece of our complete electrification solution,” says Stefan Krause, CEO and Chairman of B-ON. “And now we are very pleased to have secured a partner like Hitachi to support the service part of our plan. We believe this holistic solution is the key that will finally open the door for fleet owners to finally make this transformation.”

The involved companies have not revealed further details of Hitachi’s investment in announcing the latest developments. Tobias Jahn, Partner at Hitachi Ventures, simply says: “Hitachi Ventures is committed to supporting key initiatives driving society’s transformation to carbon net-zero. B—ON’s vision of a world where last-mile transportation works for people and planet is perfectly in line with our own and made them a natural strategic choice for us.” He went on to say that their proven product, the expert team behind it, and the “insightful holistic business model are a unique and unbeatable combination for accelerating the electrification of commercial fleets worldwide.”

Earlier this year, Deutsche Post sold its electric delivery vehicle subsidiary to Luxembourg-based holding company Odin Automotive. In this deal, all of Deutsche Post’s rights and production know-how, including its subsidiaries in Switzerland and Japan, went to the new owner. Deutsche Post DHL Group did not disclose the purchase price. Later it became clear that the German postal services company retained a ten per cent share of the company. StreetScooter was originally founded simply because back in only 2014, not a single German vehicle manufacturer was producing electric delivery vans and Deutsche Post required electric vehicles for its own services.

Three weeks after its takeover of StreetScooter this year, Odin Automotive announced the official start of production of the first vehicles under the new management. These will be manufactured on the existing production line in Düren, Germany, and delivered to the former owner Deutsche Post DHL Group.

At the end of March this year, Odin Automotive also became active in North America. The company partnered with delivery company GoFor to deploy its electric transporters in the US and Canada from the second quarter of 2022.