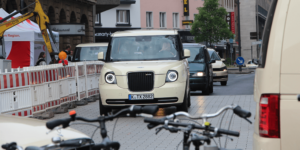 The first inductive charging system for electrified taxis in the public space of Cologne was put into operation in the immediate vicinity of the city’s main railway station on Friday.

As part of the TALAKO project launched in autumn 2019, the prototype of the inductive charging system was last installed a year ago at the Auto Stephany taxi company in Mülheim. With the commissioning, the first vehicle, a LEV TX, has also been converted to inductive charging technology.

The prototype installation in Mühlheim will now be followed by its use in public spaces. “I am delighted that the first installation of this kind is going into operation in Cologne. This is the right step to promote climate-friendly mobility. Here, we as a municipality are called upon to test and promote such innovative technologies as a contribution to air pollution control and climate neutrality,” says Ascan Egerer, Councillor for Mobility of the City of Cologne.

The inductive charging system with the first two wireless charging stations was set up on behalf of RheinEnergie AG and will continue to be operated after the end of the project. Four more charging stations of this type are to go into operation in the next two weeks. Two partners of TaxiRuf Köln have ordered five LEVC TXs for this purpose and will test the technology with the electric taxis.

The Federal Ministry for Economic Affairs and Climate Protection (BMWK) is the funding body for the project. The City of Cologne, as project partner, provided the public street land and is also funding the project with 48,000 euros. The project “Taxi Charging Concept for Public Space” (TALAKO for short) started in October 2019 with a term of three years and a funding volume of two million euros. It is being led by the University of Duisburg-Essen.