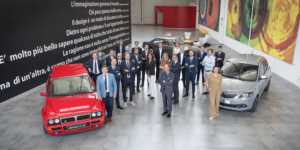 The Stellantis subsidiary Lancia has given more details about its planned transformation into an electric brand. Starting from 2026, all new Lancia models are to be purely electric vehicles. From 2028, the brand wants to sell exclusively 100 per cent electric cars.

Last year, the parent company Stellantis had already announced that from 2026, new Lancia models would only be launched on the market with electric drive. However, Lancia will launch its first electric car as early as 2024.

The electric pioneer model will be the Lancia Ypsilon, which, with a length of around four metres, falls into the B segment of sedans with hatchbacks. This model will be exclusively electric. In 2026, Lancia’s “new flagship” will follow with a length of around 4.60 metres. However, the Italians have not yet named the model. A 4.40-metre-long all-electric successor to the Lancia Delta is planned for 2028.

With these three new electric cars, Lancia wants to cover about 50 per cent of its sales. According to the press release, the models have the task of strengthening Stellantis’ position in the premium and luxury segment, as the company has set out in its “Dare Forward 2030” strategy. The platforms on which the new models will be based were not mentioned.

In addition, Lancia has named new country heads in five European markets as a first step under the strategic plan. In Germany, Niccolò Biagioli will take on this task. For France it is Paola Pichierri, for Spain Francesco Colonnese, for Belgium and Luxembourg Patrice Duclos and Patrick Zegwaard for the Netherlands. In Italy, Raffaele Russo already holds this position. Roberta Zerbi, in her function as Head of Lancia Brand for the Enlarged Europe region, will take on the role of commercial coordinator for the countries.

Of course, digitalisation also plays a role: for example, the importance of online sales led to the selection of these countries outside Italy. The market significance of the B-premium segment was also decisive for Lancia. The countries mentioned are to be the first step in Lancia’s “internationalisation process”. A network of around 100 authorised dealers will be established in 60 major European cities. Around 50 per cent of all purchases are to be made online.

Audi launches pre-sales of the Q4 e-tron in China