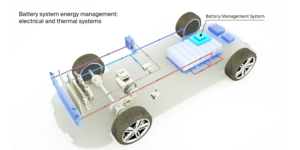 Automotive supplier Marelli is expanding its range of battery management technologies for electric vehicles with a new Wireless Distributed Battery Management System (wBMS). The solution eliminates the need for wiring, as communication between the batteries and the control unit takes place via wireless technology.

Marelli will make the system available from the second quarter of 2022 to support its customers with rolling out the solution in 2024. Compared to wired distributed solutions, the company’s proprietary system is said to reduce the wiring harness by 90 per cent and in this way also simplify the design and installation of the battery cells. In addition, wBMS is said to offer more flexibility in battery module placement and create more space in the battery pack.

“Marelli designed both the wBMS and the Wired BMS with identical base architectures, supported by two different ways of communication and interfaces,” explains Razvan Panati, Head of Power Electronics in Marelli’s Vehicle Electrification Division. “In that way our technology can be applied across multiple vehicle platforms with minimal change. This flexibility of the solution guarantees significant reduction in engineering costs and allows Marelli to make this high-end technology affordable for the mass market.”

The Marelli Group was only formed in 2019 as a result of the merger between the Italian supplier Magneti-Marelli (which previously belonged to Fiat-Chrysler) and Japanese firm Calsonic Kansei (with roots at Nissan). At the end of November 2020, the company announced its intention to assemble electric drives in Cologne, Germany from 2021. To this end, a production line for electric drives has been installed on 18,000 square metres in the Cologne-Niehl district, not far from the Ford’s German plants.

Marelli Electric Powertrain Strasbourg, a joint venture between the automotive supplier and the transmission manufacturer Punch founded in May 2021, received its first series order for electric axles from an unnamed OEM in December 2021.