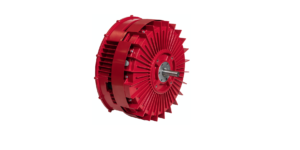 In the USA, Texas-based Infinitum Electric, creator of an air-core motor for commercial and industrial vehicle segements has secured $80 million in a Series D funding round. This brings the company’s total funding to $135 million.

Infinitum Electric says it will use the investment to vertically integrate and automate the production of its motors for the commercial and industrial market segments. The company has been working on the complete development and commercialisation of a traction motor that it says has “exceptional breakthrough power density.”

Riverstone Holdings led the round, and among others, Chevron Technology Ventures, Energy Innovation Capital and Ajax Strategies participated, which brings the company’s total funding to date to $135 million. Already invested in the company are, among others, Rockwell Automation and Caterpillar Venture Capital.

Infinitum Electric launched of its IEs Series of motor systems in 2020. The company says it has already secured customer agreements with more than $900 million in “potential orders” different companies in heavy industry, manufacturing, HVAC and transportation.

In its air-core motor design, Infinitum Electric says it has replaced heavy iron – as is most often used in traditional motors – with a lightweight, printed circuit board. The company claims these motors can generate the same power in half the size and weight as conventional motors. As the company also points out, since the motors are electric, they of course also have zero tailpipe emissions and dramatically less noise production than conventional motors.

John Staudinger, managing director of Riverstone Holdings said of the investment: “Decarbonisation across commercial, industrial and consumer markets driven by ESG and the energy transition creates wide scale opportunities for Infinitum Electric’s motors to power a new generation of equipment with greater performance, and at a fraction of the carbon footprint of traditional motors.”

Included in the planned expenditature of this lates round of fresh capital, Infinitum Electric plans to expand high-volume production out of its facility in Tijuana, Mexico. In the USA, the company says it aims to double its workforce this year with an additional 50 employees across its Round Rock and Spokane, Washington offices. to In order to support the company’s rapid growth and expanding operations, Infinitum Electric has already moved its headquarters to a larger facility in Round Rock, Texas.