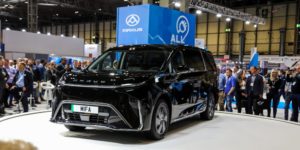 SAIC brand Maxus has unveiled two new electric models. The new Mifa 9 van and the T90 EV pickup can be ordered in the UK from August 2022 and are scheduled for delivery from the first quarter of 2023.

It is not yet known whether the two new models, like the brand’s electric transporters, will also be offered in other European markets in the future. In the British announcement, Maxus states that the two new models are intended to “revolutionise the market”. The company’s electric pickup variant EV T60 Ute is already available to order in New Zealand, with deliveries expected in the later half of 2022.

The first of the two model premieres at the Commercial Vehicle Show in Birmingham is the Mifa 9, which Maxus first showed at the Guangzhou Auto Show in China in November 2021. The electric seven-seater is 5.27 metres long, a smooth two metres wide and 1.84 metres high. With a 93 kWh battery with unspecified cells from CATL, an NEDC range of 520 kilometres should be possible.

The electric motor is rated at 180 kW and is said to offer a maximum torque of 350 Nm. Maxus does not currently provide further details on driving performance and consumption. Instead, features such as the front and rear radar or the electrically opening tailgate and sliding doors are highlighted in the announcement. The exhibit in Birmingham is characterised, among other things, by rather opulent seats reminiscent of a VIP shuttle. Whether there will also be a version of the Mifa 9 with simpler seats or a load compartment separated from the cockpit is not mentioned in the British communication. Prices are also not yet known.

The Maxus T90 EV electric pickup is the electric version of the T90 available in China. The electric motor has an output of 150 kW, the battery has an energy content of 88.55 kWh. Despite the large battery, the range is given as only 320 kilometres in the city WLTP system. In the combined WLTP, the range should therefore be significantly less. 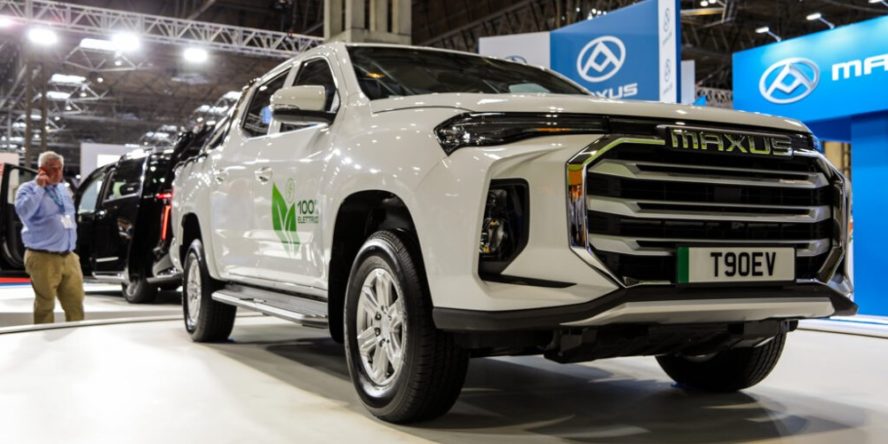 The city range is not likely to be a particularly important indicator for the electric pickup truck – the (commercial) use of the pickup is more likely to be overland or off-road. In general, standard ranges for such vehicles should be treated with caution – it depends very much on the respective application and whether the payload of up to 740 kilograms is utilised or not. Maxus only states the total weight of 3.3 tonnes of the rear-wheel-drive version in its communication, but no towing capacity. The T90EV is 5.37 metres long, 1.90 metres wide and 1.81 metres high. The load area is almost square at 1.84 by 1.51 metres, and 53 centimetres high up to the cover.

For both models, Maxus does not yet provide any data on the charging system, so performance in AC and DC charging is not yet known.

SAIC’s Maxus brand has launched sales of its T90 EV electric pickup in the UK, unveiled at the end of May. Prices start from £49,950 before taxes. Additional technical specifications have also been revealed, including the charging performance: A peak charging speed of 80kW means the T90EV can charge from 20-80% in around 45 minutes. The T90EV is on sale now and Maxus says it has already recorded 1,000 orders for the electric vehicle model.

The range for the electric pickup truck has improved to stand at 220 miles (354  km) with a maximum payload of up to 1,000 kg, although putting a tonne of cargo in the back will likely affect the range.

UK prices for Ami and My Ami Cargo revealed

Rivian has fired their head of production